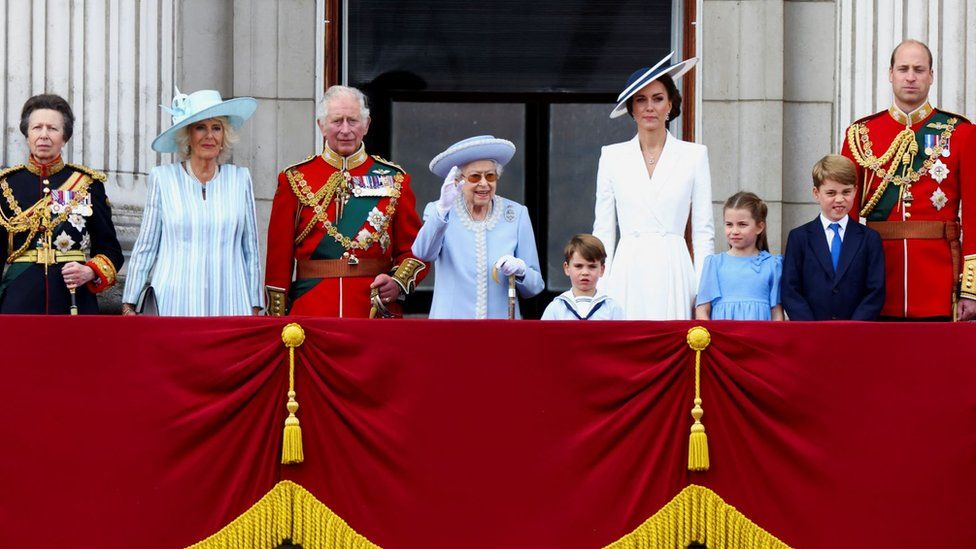 On June 2, Queen Elizabeth became the first monarch to have her first platinum jubilee. This celebration is of a 70-year reign, the longest of all the previous monarchs. She stood on the balcony of Buckingham Palace with her family and senior members. They witnessed the RAF fly past and jets forming the number 70 to honour the long-lasting reign. The official birthday parade marked the start of her Jubilee and a 4-day celebration. It's the first parade to have a full stage since the pandemic, and the BBC news counted more than 1,500 officers and soldiers and 350 horses present in Trooping The Colour. The BBC News reported that thousands of people appeared to watch the military march display. The Prince of Wales saluted the troops on the Queen’s behalf, and rode on a horse with Prince Charles to inspect them. The rest of the royal family, such as the Duchess of Cambridge, her children, and the Duchess of Cornwall, came in a carriage. Only Prince Harry and Princess Meghan did not attend, as only “working royals” would be present.

The BBC channel will show beacons being lit up in the UK, and countries of the Commonwealth on Thursday evening. Sky News says it will be “3,000” in total in unison with the principal Tree of Trees lights being illuminated. Usually, this beacon is created by fire, but this time, it’s different. Moreover, community beacons will be lit in towns, villages and local communities, and 54 Commonwealth beacons in their capital cities. For example, it showed Singapore having their own celebration in honour of the Queen, as it was under British rule for 140 years.

Many onlookers had different opinions about this tree. One said it looked like an “impressive feat of engineering'', and another felt it was ''like something you’d pick up at the hardware store.” This year, with high hopes, the Queen will be able to attend the many celebrations held in her name. However, she has been suffering from mobility problems recently, which could make it hard to have this fulfilled. Although Buckinham Palace said “she is to lead the Jubilee beacon at a ceremony at Windsor Castle.”

The UK has had this tradition of lighting beacons to celebrate Jubilees, weddings, and coronations, like in 1897, beacons were lit for Queen Victoria’s Diamond Jubilee. They have become a symbol of key moments in national significance, as said by Sky News.

On Friday, 3 June, there will be a thanksgiving dinner for the royal family at St. Paul’s Cathedral. However, Prince Andrew will not be attending as he recently tested positive for Covid. Additionally, Prince Harry and his wife are expected to make an appearance on that day.

On the 4 June, there will be a platinum party at the Palace with music that will include the Queen and Diana Ross. To conclude, a big jubilee lunch will be held, and 10 million will be in the street parties and in the celebrations. There will be a London pageant and a military parade with the presence of Ed Sheeran.

A Run Down of The Queen's Platinum Jubilee Celebrations