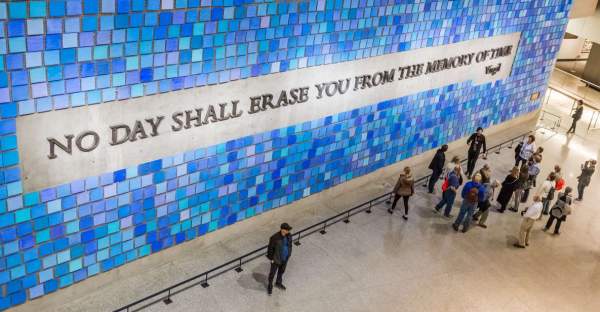 On the morning of September 11, 2001, many families bid farewell to their loved ones, not knowing it would be the last time they would see them. The sheer chaos and horror that unfolded on the soil of the greatest nation of the modern world, left people in shock and confusion. The visuals of two planes crashing into the World Trade Centre silenced the international community. Left in a dire state of helplessness, the United States of America witnessed the deadliest terrorist attack to ever occur in its history. The 9/11 attacks were responsible for nearly 3000 deaths and over 25000 injuries.

As America marks the twentieth anniversary of the 9/11 attacks, candlelight memorials and commemorations were held nationwide to honor the brave and innocent souls. The remembrance ceremony at Ground Zero in Lower Manhattan, New York began with a moment of silence at 8:46 AM – the time the first flight crashed into the North Tower of the World Trade Centre. The final moment of silence concluded the event at 10:28 AM, in observance of the collapse of the North Tower. The ceremony witnessed the presence of President Biden, former Presidents Barack Obama and Bill Clinton. Then-president, George W. Bush along with Biden attended a wreath-laying ceremony at the remote field where President Biden urged the American population to live in unity and harmony. Leaders from around the world also expressed their respect and solidarity.

What makes this twentieth anniversary so special?

September 11, 2001, provoked a series of events that changed the world forever. The US response to 9/11 was swift and fierce. On October 7, 2001, the US launched “Operation Enduring Freedom” against all those suspected to be behind the attacks, mainly the Al-Qaeda and Taliban regimes in Afghanistan. The US forces aimed to overthrow the Taliban regime and re-establish all core institutions of the Afghan state. Thus, began what came to be known as the longest war in American history.

One of the biggest outcomes of the operation came in 2011 when President Barack Obama, with the help of the Navy Seals, launched a highly classified mission to kill Osama Bin Laden, the main perpetrator behind the 9/11 attacks.

The decades of continuous battle, violence, and bloodshed claimed 170000 lives and cost over $2 trillion. The US military also apprehended many Afghans who were suspected to have connections with the Taliban and Al Qaeda and detained them in very inhumane conditions at the Guantanamo Bay.

Finally, on August 30, 2021, just two weeks before the twentieth anniversary of the 9/11 attacks that started it all, Joe Biden ordered the removal of all US military forces from Afghanistan.

After two decades, what is the state of justice for 9/11 victims?

Twenty years after Sept. 11, 2001, five men accused of plotting the attacks that killed nearly 3,000 people that day are still awaiting trial before a military commission at Guantánamo Bay, Cuba. The five defendants are charged with conspiracy, terrorism, and the murder of 2,976 people. The trial was delayed due to longstanding allegations that the authorities were using duress to forcefully make the accused confessed.

The case will resume with a new judge after a 17-month pause due to the COVID-19 pandemic. The selection of a military jury was scheduled to begin in January of this year but now will not begin until 2022 at the earliest. Attorneys for the defendants are expected to argue that the interrogations performed by the FBI in 2007 should be ruled inadmissible as they were conducted under duress.

Although the US government assures all victims that justice shall be delivered, legal opinions believe that a conviction is nowhere in sight. Moreover, the latest developments also suggest that the United States is slowly entangling itself in the Middle East. Despite two decades having passed, the victims and their families continue to remain in the dark as justice still eludes them.

The question arises: Will the 9/11's innocent victims and their families receive justice they deserve?

The attacks were captured in countless photographs and videos that depicted the shock, horror, courage, and humanity that was displayed. There is no doubt that those who hear or read the survivor accounts will feel shivers going down their spines. 20 years later, the work of identifying remains continue. There will never be an end to the devastating impact that 9/11, had on humanity. September 11, 2001, will be etched into the memory of mankind forever.