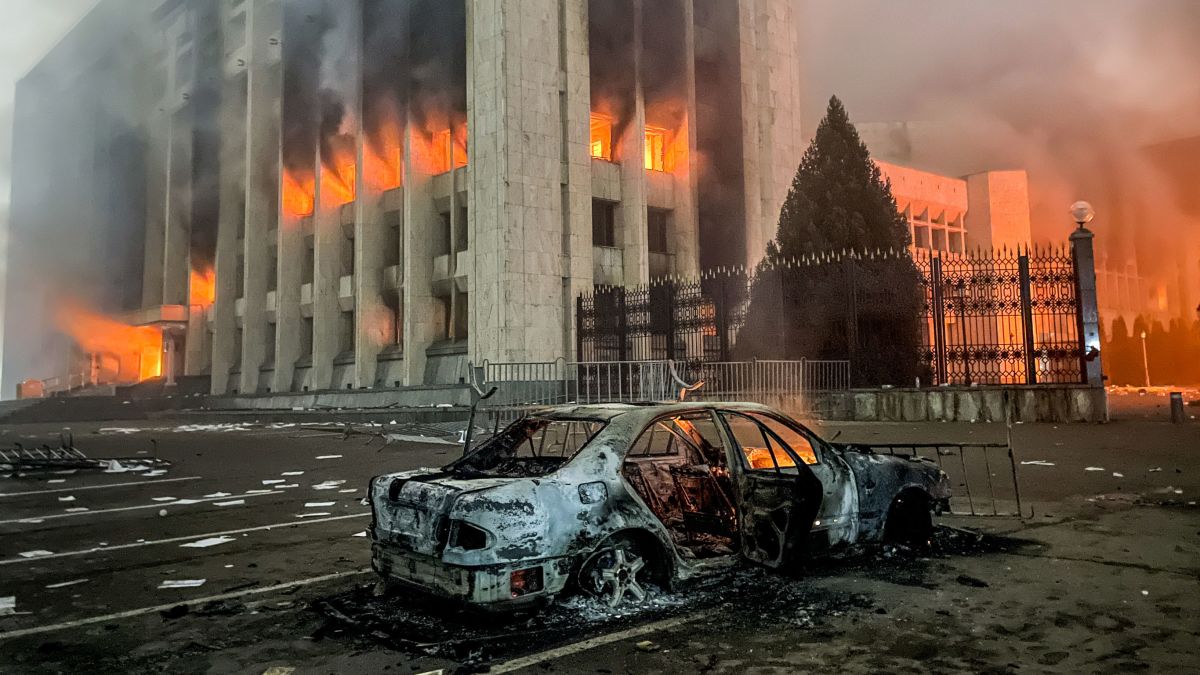 Days after the protesters hit the street of Kazakhstan demanding lowering of severely hiked LPG price, the situation of crisis and uncertainty continues in the country. The Moscow-led Collective Security Treaty Organization and Russian paratroopers that were dispatched on the president’s appeal clashed with the rioters on Thursday. The president of Kazakhstan, Kassym- Jomart Tokayev proclaimed the riots as a ‘terrorist’ attack and ordered the troops to fire ‘without’ warning. The battle killed more than 26 rioters, over 18 were injured and thousands of them detained. Following the rising situation of crisis in once stable country, United Nations urged the protesters to refrain from violence. While Chinese president made statements of his full support towards the Kazakh government, European Union asked Russia to ‘respect’ Kazakhstan’s sovereignty and independence as their troops are being deployed.

The civil unrest in Kazakhstan erupted on Sunday as a response to government’s newyear policy in hiking the price of Liquid Petroleum Gas. The country is rich in natural gases and contains 3% of global reserves of oil. The international trade and government’s autocratic policies have created situations of shortage of oil and natural gases available for the use of locals. The situation had also previously created much debates across the nation. LPG is widely used in the country as auto-mobile fuel. The price hike initially lead to protests in the western oil town of Zhanaozen and was spread to wider regions in the country including its largest city Almaty by Wednesday. The rioters demanded to lower the increased fuel price and the resignation of the government.

Following the riots by thousands on the streets the city, the president imposed a state of emergency, dissolved the cabinet and said that he would cut down the increased fuel price. But protests turned out violent in the city, rioters storming into local government headquarters, vandalizing and burning down the political powerhouses.

The autocratic regime of Kazakhstan had always been unsupported by the people since the country’s independence from Soviet Union in 1991. There were several instances of unrest in the country demanding democracy, lately during 2019 presidential elections when the former president and long time ruler Nursultan Nazarbayev decided to step down and handed over the post to his successor Tokayev. The repressive government quelled such protests so far until the situations went out of hands this week. “Old man out!” chants were heard from the protesters against the still continuing influence of Nazarbayev. Following the demands the president replaced Nazarbayev as the leader of country’s security council.

What is happening now:

President declared a state emergency across the country determined to curb the uprising. Internet and messaging services are disrupted in several parts of the country. The national guard and police along with CSTO and Russian paratroops are taking back the control over the cities suppressing the rioters. Increasing fatalities and casualties are being reported. Situation remains chaotic.