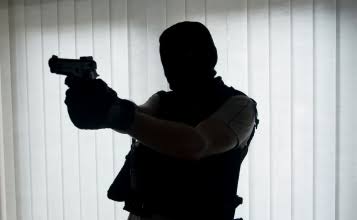 A gang of six armed robbers attacked church members during a church service in Johannesburg on Saturday afternoon. The members of the Seventh-day Adventist church are left traumatized.

TheSocialTalks spoke to some of the church members who were at church while the incident occurred. The members revealed that four armed robbers entered the church from outside, and two were already in the service posing as worshipers, accounting for six.

One of the members who asked to remain anonymous said, “The four robbers walked through the doors whistling to each other while the preacher was in the middle of preaching. They walked to the front and first disconnected the sound system and security cameras.” “They brought guns and ordered us to put our phones and handbags in a plastic bag like they were collecting offerings. They knew their way around the church like people who had been there before,” she added.

Another member who was interviewed the that the leaders of the church made sure the incident was reported to the police. The congregants said their missing belongings and those with insurance for their items were compensated for their losses.

“There was an agitated atmosphere after the robbery as the congregants could not wrap their heads around what had happened. Luckily no one was physically hurt by these robbers. The church leaders immediately organized a counseling session for the church members as they needed it after the ordeal,” a lady said.

It seems that the robbers are targeting churches and other places of worship to gain easy cash and valuables. This incident is not the first to be reported, as similar incidents have been notified of robbers looting unsuspecting worshippers.

Last month  Scroll Africa reported a similar incident of church members being robbed during a church service in Alexandra, South Africa. The robbers had stripped the worshippers of most of their valuables, including the day’s offering.

Another incident was reported by  IOL news last week of a video of a mosque being robbed in Johannesburg. In the video, robbers are seen frisking pockets of the praying congregants and forcing them to lie down while searching them.

Members of these churches are scared to go back to church due to these series of robberies in places they consider safe and holy.