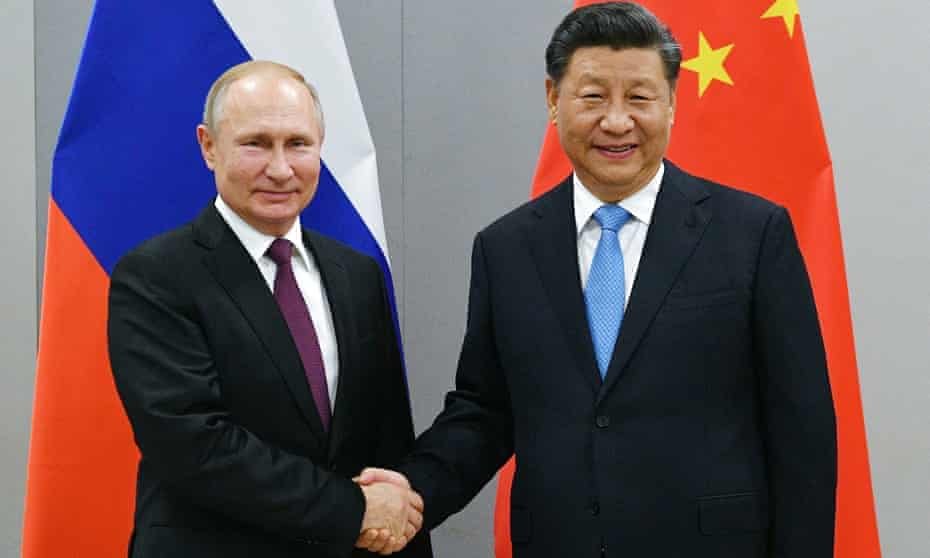 On February 4, a face-to-face meeting was held in Beijing, where the President of Russia Vladimir Putin and Chinese leader Xi Jinping made a team, against the Western alliance and decided to counterpart the power of NATO (North Atlantic treaty organization). It was decided in the meeting, that the NATO alliance, formally led by the US, should not extend its possession.

In the meeting, Russia got the support of China over the issue of Ukraine also. After the decision to stop NATO from expanding its area, we can see clearly that Jinping and Putin, are hosting a dignified war between the two nations

In the long strategy document issued by Beijing and Moscow on Friday, both the countries also commented on the role of Washington in disturbing the security of the globe especially in the Asia-Pacific region. The document also stated that both the nations oppose the expansion policy of NATO, and they want that NATO renounces the ideological approach of the cold war era. They also demanded respect for the “sovereignty, security and interests of other countries”.

The conversation between them reminds the demand of Russia that are topic of negotiations between Moscow and the west, and this can also be a possible confrontation taking its shape in the background.

NATO Secretary-General Jens Stoltenberg replied to Russo-Chinese claims. He told MSNBCs Morning Joe (Morning Joe is a Talk Show on American News Channel MSNBC), “this is fundamentally not about NATO expansion. This is about respecting the right of every sovereign nation to choose their path.”

Russia was accused by western nations, of placing 1,00,000 troops on the borders of Ukraine. Western countries threaten Russia that if it attacks Ukraine, they would invade it, and put massive sanctions on Russia’s capital Moscow.

AUKUS defense alliance which includes Australia, the UK, and the US, describe it as “seriously-concerned.”

German chancellor Olaf Scholaz recently planned to visit Ukraine on February 14 and Russia on the next day.

President of France Emmanuel Macron decided to visit Moscow on Monday and Kyiv (capital of Ukraine) on Tuesday for negotiations.

Before the opening ceremony of the Winter Olympic Games – Putin’s conversation with Jinping – the US claimed it a proof of strategy of Russia to create a fake Ukrainian attack on Russians to defend the attack on its neighbor.

John Kirby, a spokesman of the pentagon, claimed that they have information about the invasion plans of Russia but don’t have any sure evidence. In response, Russia continuously denied all these allegations and said them illogical.

Kuleba said, “our partners believe in Ukraine, and that means Moscow’s intimidation strategy is not working. Russia has lost this round.”

An agreement on expansion the production of Turkish combat drone’s parts in Ukraine whose sale to Kyiv has annoyed Moscow between Turkish president Erdogan and Ukrainian president Volodymyr Zelensky.

West has accused to make the condition “worse” Erdogan. Local media publications stated the failure of the west in settling the issue.

The relationship of Russia with the west was disturbed by 2014 after the annexation of the Crimean Peninsula from Ukraine.

In the most recently diplomatic confrontation, Russia demands not to join NATO and threatens Ukraine not to form a massive military.

Russia also demanded from NATO and US to remove the missile system from the areas near the Russian border and take back their NATO forces.

Finland and Sweden to decide on NATO membership: Repercussions of Russia Ukraine conflict in Europe