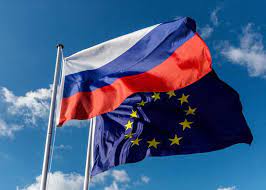 Russia and its Neighbors Through the Lens of Constructivism Josh Shevlin 08/06/2022 Professor Karl Anders-Hardig was a great inspiration for this essay. He is currently a professor at American University teaching International Relations and SISU-105: Introduction to World Politics. I was inspired to add his notes to the paper as I thought he described constructivism in such a great tone that all could understand. The complexities were challenging but his incite provides a lot of great material to focus upon. Russia’s invasion of Ukraine has sparked an international debate about the security of border states and how they interact with adversaries. In addition to the significant loss of lives and devastation of property in Ukraine, Russia has created many problems for its neighbours. On top of the looming wheat shortages and complete destabilization of the region, its neighbours could face deadly attacks at any moment, ceding potential land and lives lost. Russia’s relations with the European Union have also come under scrutiny with the international construction of the Nord Stream pipeline and the complete diplomatic and sanctioned boycott of Russia, dividing European countries who rely on the nation for material gains.

However, when it comes to studying international relations, one can look at this moment and ponder the best ways to move forward on such an intrusive case of nationalism. Russia’s invasion of Ukraine provides an excellent opportunity to look at the concept of Constructivism and how it affects Russia and its surrounding neighbours. “Power in the constructivist view can come through multiple mediums, whether liberal democracy or oligarchic.” (Anders-Hardig, Slide 3). Another one of the proponents of Constructivism is the sense of identity. “Constructivists argue that identities are created, not naturally ordained, and therefore, identities are not subjective but intersubjective—in that they don’t exist out there in the world and they don’t exist inside one’s head—they exist in the social interactions with others.” (Anders-Hardig, Slide 7) Professor Hardig also explains, "According to Constructivism, history is contingent and mutable, i.e., changeable. Constructivism focuses on the notion and possibility of change in IR. Two critical issues in Constructivism are that stability is produced, and change is the natural state.” He later states, “Unlike realists and liberals, constructivists do not take the notion of stability as a given or a presumption. Stability in the international system and peace requires a lot of conscious effort because there is nothing natural about how things are organized, and they can be very differently arranged in the future. Constructivists would argue that everyday practices and everyday actions need to be investigated to see how stability is produced.” Russia is a state that has faced constant turmoil throughout its storied and long history. From the onset of the Russian Empire to the collapse of the Soviet Union, instability has defined Russian politics, and the world has had to adjust to the consequences.

Constructivists would argue that some stability was achieved through mutually beneficial economic relationships. Russia’s neighbours have conducted commerce and trade with the United Russia’s government despite tensions because it was mutually beneficial. However, these economic relationships also set the stage for future problems. Russia’s commercial interactions with its neighbours helped solidify Vladimir Putin's legitimacy and United Russia’s regime. Additionally, because of the Western-backed coup of Pro-Russia President Viktor Yanukovych in 2014, the Ukrainian government gained leadership that was apathetic and hostile towards the Russian Federation, eventually inspiring the Russian President Vladimir Putin to invade and annex Crimea and finally Eastern Ukraine. The Russian government has a monopoly of influence on its neighbours. Russia is one of the world’s largest wheat exporters, with 19% of the world’s wheat exports coming from the nation, according to OEC. Additionally, according to data from UC Davis, Russia produces 11% of the world’s total wheat supply. Ukraine is also a heavy wheat exporter, with 3% produced and 9% exported. Allowing the policy to degrade without the confines of Constructivism could destroy the global food chain, sending millions across the global south into hunger and poverty while causing supply chain issues elsewhere. A poll by Statista states that the majority of Western nations, including the United Kingdom, United States, Poland, Spain, and France, see Russia as a significant military threat to its neighbours, with 59% of Poles, 53% of Britons, 59% of Americans and 49% of Spaniards classifying them as a significant threat. Russia’s status among world powers is completely shrivelling, and issues could arise if tensions aren’t addressed within the next few decades. As Constructivism concerns the relations between states and the changing nature of global events, Russia’s descent into nationalistic fervour proves a challenging point for international relations as the sovereignty of nations comes into question when looking at territorial claims from both past and present. International organizations like the North Atlantic Treaty Organization, NATO, the United Nations, and formerly the Warsaw Pact existed to help exercise Soviet/Russian land claims in the region while keeping a strict buffer between the Soviet Union/Russian Federation and its neighbours. Through the tenets of Constructivism, the international organization is meant to bring stability and prosperity to a region, ultimately stabilizing areas within Russia’s sphere of influence like the Baltics, East Pacific regions, and Uralic mountains to create a clear buffer between liberal democracy and statism. According to Professor Karl Anders-Hardig’s notes on Constructivism, “International organizations embody shared principles and norms. That leads to what some call governance without government—they have authority, not just control, because of the shared norms.” (Anders-Hardig, Slide 10)

This principle has helped strengthen the ties between European Nations, looking to oppose the rogue Russian oligarchy as the alliance tries its best to hinder a potential invasion of their territory. When international institutions are given standards to follow through the constructivist point of view, the states will comply and create peace within the region. In what is sometimes seen as both a controversial and positive alliance between European nations, the European Union keeps the collective safety of the European continent at an utmost priority while also keeping trade between countries possible. As a result, mutual trade and homogeny prosper with a strong defence against foreign adversaries being formed on the European continent to provide a balance of power with the Russian Federation and to serve as a buffer for non-aligned states. Although Russia’s invasion of Ukraine has destabilized the relations, Constructivism could provide a pathway to new connections between the two organizations as global events shift, creating new rules for the status quo while keeping international organizations at a limited pace. For example, the controversy surrounding Nord Stream 2 and the European gas crisis could be solved by exploring proposals benefitting both sides, such as creating a new standard for trading relations in Europe. However, at the same time, Russia must also be held accountable for the extreme turmoil they have caused in Ukraine and the rest of Europe. Additionally, with right-wing populism on the rise in Russia, the European Union must fight to limit the cause of Euroscepticism, as the collapse of the EU itself could allow Russia and its allies to splurge on potential resources and governments. In conclusion, if the European continent doesn’t wish to be ruled by tyrants, it must adapt policy over long periods, adapting to global conditions through the principles of Constructivism and allowing international institutions to do their jobs to solve gas, oil, and political situations. We must never forget the impact of Russia’s invasion as Russia had strained critical relationships with the European Union at a time when tensions between the two were already evident in the development of the NormStream 2 pipeline and the interference of Russia in European elections. However, peace between the European Union and Russia will only be realized when international organization and cooperation are agreed upon by the Russian state and members of the European Union. Constructivism could be a potential path to warfare and crisis alleviation, using the principles of individual identities and material conditions to truly create a foreign policy that benefits both nations in a positive light. The only path to peace will be when both sides resolve their differences and reach a mutual agreement, ending a war sparked by opposing sides of the conflict.