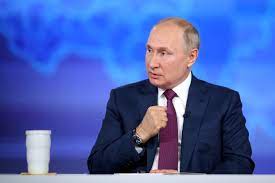 This Monday, April 25, Russia alarmed the world's citizens with the possibility that the start of the Third World War could exist very shortly as a "real" risk after the unexpected visit of US authorities to Ukraine was known last weekend. Therefore, Russian spokesmen indicated that there is a probability that a conflict will be armed with “adequate weapons” worthy of a Third World War.

In the face of the sanctions issued against Moscow, and its support for the Ukrainian forces, Sergey Lavrov, as head of Russian diplomacy, indicated that "there is a danger of a next world war" which cannot be taken for granted, that is not going to happen.

Likewise, he pointed out that the Ukrainian president Volodymyr Zelensky is pretending to be the negotiator with US forces when in fact he contradicts himself in all his actions since "goodwill has limits and, in his case, it is not reciprocal." However, he announced that they will continue with the negotiations.

About 64 days have elapsed since the armed conflict between Russia and Ukraine began. It's enough time in which the Ukrainian president has requested without giving up armed reinforcement to his allied countries to face the Russian army, and apparently, it has been favored since NATO has shown solidarity and committed to sending heavy weapons to Ukraine despite the protests in Moscow.

On the other hand, the growing support that the Ukrainian cause has had on the part of the United States could be seen evidenced by the visit of North American officials without any type of announcement, spokespersons that indicated that the Ukrainian military forces "can win if they have good equipment the right support."

After this statement, in an evening press conference the Ukrainian president indicated that despite the "temporary loss of territory" the victory of his nation, towards the permanence of independence, was only a matter of time, and attributed this to the "courage of his people which is a true symbol of the struggle for freedom”.

The visit of US officials did not come alone, as it brought with it 700 million dollars that would go to military aid, whose contribution could reach 3,400 million dollars by the North American nation. It was also indicated that this is only the beginning of a prolonged aid and alliance with the conflicted European country so that it can maintain its independence and sovereignty from Russia.

Likewise, the United States announced that the US embassy in Kyiv will be reopened, and progressively, with Bridget Brink as its sovereign ambassador. It should be noted that this embassy has not had a representative since 2019 and that now, Brink would occupy that open vacancy.