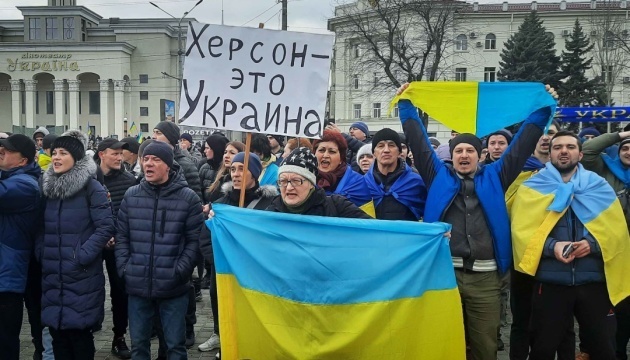 People in the streets of Kherson against Russian occupation. Source: ukrinfrom.net 02.05.2022.

Last Wednesday, Russian President Vladimir Putin signed a decree to fast-track citizenship to residents in Southern Ukraine. This action is aimed particularly at the citizens in the Russian-occupied regions of Kherson and Zaporizhia.

The decree`s provisions are the same available since 2019 to the residents of Donetsk and Luhansk, giving them the right to access Russian citizenship. As of 2019, circa 800,000 passports have been issued in these two regions. According to the newly issued decree, applicants are not expected to have lived in Russia, and they do not need to provide any proof of sufficient funds to sustain themselves or of proficiency in the Russian language.

Ukraine responded promptly to this action. The Ukrainian Ministry of Foreign Affairs, in the person of Dmytro Kuleba, condemned the decree as an illegal act aimed at forcing the inhabitants of the targeted regions to acquire Russian citizenship.

In his statement, the Minister said that actions like the forced passportization of Ukrainian regions are a serious violation of Ukraine`s sovereignty and territorial integrity and a breach of norms and principles of international humanitarian law. He also stresses that through these actions, Russia is not complying with its obligations as per article 47 of the Convention for the Protection of Civilian Persons in Time of War of 1949.

The minister emphasized that Russia has been committing crimes against the Ukrainians since World War 2, demanding that the European Union acts directly by implementing the sixth EU sanctions package, particularly the provision on the total embargo of Russian oil. He deems also necessary a seventh package as the Russian regime should be brought to justice as soon as possible.

In February this year, Putin unilaterally recognized the independence of the separatist regions of Donetsk and Luhansk. This is justified by the Russian leader in an article published in 2021, where he explains that Ukraine is an integral part of Russia`s history since Ukrainians and Russians are essentially the same people.

He stressed the historical links between Russians, Ukrainians, and Belarussians and that eastern Ukraine has always been an integral part of the ancient Russian lands.

Turning to several historical events, he points out that these three Slavic groups are all the descendants of the Ancient Rus, the largest territory in Europe. They were united by strong economic ties, the Rurik dynasty, and, most importantly, the Orthodox faith after St. Vladimir decided, in the late 9th century to be baptized and become Prince of Novgorod and Grand Prince of Kyiv.

On these grounds, he proceeds to the narrative of total negation of an independent Ukrainian state since one cannot deny the affinity of the three Slavic groups. Ukraine, therefore, cannot have and never had a tradition of its own.

Passportization is a common practice. It was also applied also in the past in other separatist regions like Abkhazia, South Ossetia, and Transnistria to strengthen ties with the local population. It has been reported that at least 90% of the population of Georgia’s South Ossetia and 85% of Abkhazians had received Russian citizenship and that about 250,000 out of 500,000 people living in Moldova’s breakaway Transnistria region hold Russian citizenship.

These recent developments cannot but remind us of the events that took place in Crimea in 2014 and the subsequent referendum for annexation to Russia. These fears are now spread among Kherson residents where people believe that Russia is planning to hold a referendum to create a People's Republic of Kherson.

Passportization policies in Kherson and Zaporizhia are not a random choice for the Kremlin. The strategic position of these cities makes them extremely important for Russia.

Kherson, a city whose economy is largely based on ship industry, is located close to Crimea at the confluence of the Dnieper River and the Black Sea. Likewise, Zaporizhia is located on the Azov Sea, and it is one of the major ports of the country, along with Kherson.

Occupying these two cities and annexing them to the Russian Federation would, therefore, create a strategic geographical and geopolitical continuum by providing total access to the Black Sea.