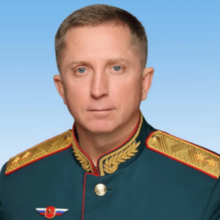 Commanding officer of Russia’s 49 combined army Yakov Rezantsev is reported to be dead by the Ukraine Defense Military. The former is said to have died in a strike near southern city of Kherson.

The incident was reported by the Ukrainian media on Friday revealing that the Lt. General has died at the airbase named as Chornobaivka airbase, near the city of Kherson; an airbase reported to be the commanding base of Russia which has been attacked on multiple times by Ukraine’s military.

Lt. General Yakov Rezantsev is considered as the seventh general to have died in Ukraine and the second Lt. general (highest rank officer) killed.

The reason of death of the General is coming out as the ‘low morale among Russian Troops’ which forced the officials to be close to the battlefield. Another reason is the usage of open communication, such as mobile phones and analogue radio, by the Russian troops possibly giving away the locations of the Generals to Ukraine.

So yet, Vladimir Putin has only mentioned to the death of one general, assumed to be Maj Gen Andrey Sukhovetsky, in a speech soon after the commencement of the war.

Russia claims 1,351 soldiers have killed in Ukraine since the conflict began, but Kyiv and western officials claim the number is significantly higher.