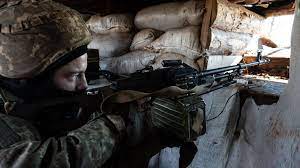 Recent updates confirm that Russia has pulled back some of its troops from the Ukraine border to the bases. This is the first possible move from the side of Russia towards de-escalation since the suspicions of invasion were raised by western nations. There were about 1,30,000 troops estimated to be deployed along the Ukrainian border by Russia and the numbers that have withdrawn are unknown. Agencies reported that the Kremlin has confirmed the news. Some units of western and southern military districts had completed their exercise and they were pulled back to their bases.

Russia had always denied allegations of invasion from the west. “We’ve always said that the troops will return to their bases after the exercises are over. This is the case this time as well” Kremlin spokesperson Dmitry Peskov said. Russia had confirmed yesterday that they will continue diplomatic efforts to solve the existing tensions amid warnings from the western powers.

The UK and US agencies have said that Ukrainian allies should still stay cautious on their borders. The Ukrainian Foreign minister Dmytro Kuleba said that Kyiv would only believe that Russia was moving to de-escalate their alleged operation if there is a visible pullback of troops from its borders. NATO chief Jen Stoltenberg said that there are “signs from Moscow that diplomacy should continue. This gives grounds for cautious optimism” about Russia’s recent moves on the Ukrainian borders. “But no signs of de-escalation were visible on the ground from the Russian side”, he added.

Video footage was published by the Russian defense that showed some military vehicles and equipment being loaded onto railway flatcars, backing their statement on troop withdrawal.

The Kremlin began its military operations on the Ukrainian border after its ex-soviet counterpart made moves to join the western military organization NATO. Since large numbers of Russian troops were deployed at the border, a high chance of possible invasion was alleged by the western powers.

US-based agencies reported that Russia was conducting large military exercises along the Ukrainian border even earlier this week.

Tuesday, the new German Chancellor Olaf Scholz arrived in Moscow. He has begun discussions with Russian authorities on de-escalation of their troops and diffusing the existing crisis of emergency. The latest move by the Russian military is seen as a positive sign amid the alleged war threats. Several countries have come up expressing their open support for Ukraine and have also extended their financial aid for the country to resist the Russian invasion. The US and the UK authorities were constantly warning of an imminent action from the Russian side in recent days.

At the same time, the Russian lower house in parliament voted to ask Russian President Putin to recognize the independence of two breakaway regions of Ukraine backed by Russia.

Russia to hold 'No concessions' as Ukraine talks with US begin