Ukraine’s triumph at Eurovision, after the Kalush Orchestra scored a record 631 points, was quickly followed by the release of chilling images from Russian Pro-Kremlin Telegram channels.

Eurovision is an international singing competition organised annually by the European Broadcasting Union, often noted as the largest global concert in history. Countries compete and are awarded votes from each other and the audience, with Ukraine scoring a staggering 439 points from the public, the highest number achieved in Eurovision history.

Despite Russia’s participation in previous years, the country had been banned from entering (alongside being banned in other international competitions) in 2022 due to the ongoing war in Ukraine.

The campaign from Russia began after the Orchestra’s plea for more international aid to be sent to Mariupol, a city currently under Russian siege. While on stage, Oleg Psyuk, the lead in the band, stated: ‘I ask all of you, please help Ukraine. Mariupol. Help Azvostal, right now’.

These sentiments echoed those of President Zelensky, who released statements in support of the band and campaigning for a victory. After the final results, thousands of Ukrainians took to social media to celebrate the triumph, with many viewing it as both a major victory and a symbol of European support for their country.

While the Kalush Orchestra’s song ‘Stefania’ was originally written as a tribute to Psyuk’s mother, the song had taken new meaning since the worsening of the Russian-Ukraine conflict in February. In particular, the lyrics ‘I will always find my way home, even if all roads are destroyed’ had become increasingly resonant with the people of Ukraine, with many viewing it as a song of hope.

Criticism in Russian state media grew at the voting segment of the show, where many of the 40 European countries announced their support for Ukraine.

In response to Ukraine’s victory being announced, images surfaced of Russian troops writing the chilling messages ‘Kalush, as you asked’, ‘help Mariupol’, ‘#eurovision2022’ and ‘help Azovstal right now’ across missiles. 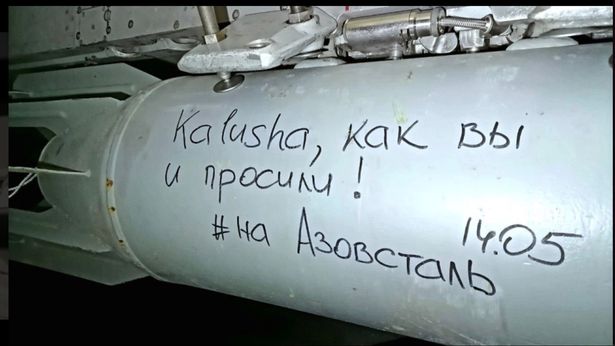 Although the exact destinations for the missiles were not made definitively apparent, it is widely believed that they were used in the following attack on the Azovstal Steel Plant in Mariupol, a mere 3 hours after Ukraine’s Eurovision victory.

The Azovstal Plant was believed to contain multiple trapped citizens, though no casualties have yet been reported.

This attack occurred during a new wave of missiles being launched on Western Ukraine, with targets near Lviv also being hit in the early hours of the morning.

Following the news of Ukraine’s win, it is not clear where the contest will be held in 2023 despite President Zelensky’s wishes to hold it in Mariupol.