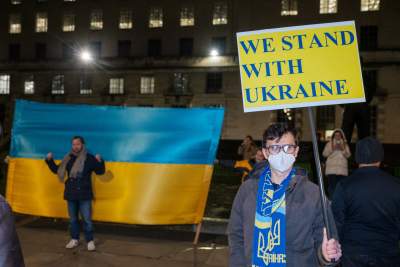 On Wednesday, Russian Foreign Minister Sergei Lavrov said that if a third world war is waged, it would involve nuclear weapons and be destructive.

It was only in the last week, that Russian President Vladimir Putin was reported to have ordered his nation’s nuclear forces to “start this special mode of combat duty of our deterrent forces”, reported Pavel Podvig, a senior researcher at the United Nations Institute for Disarmament Research in Geneva.

While the exact meaning of the phrase “special mode of combat duty” remains unclear to many, according to Podvig one possibility can be that the order activated Russia’s nuclear command and control system.

According to Hans Kristensen, the Director of the nuclear information project at the Federation of American Scientists, “We estimate that they (Russia) have about 4500 or so nuclear warheads in their military stockpile”.

Meanwhile, Russian forces have scaled up their military escalations in Ukraine, shelling even civilians.

Amidst this, after the failure of the first round of negotiations held this Monday, the two countries will be sitting for the second round of talks today.

Meanwhile, US President Joe Biden, though reinforcing his support to Ukraine, said that the US will not be involved in the war and will protect NATO territories together with its allies.

On the other hand, while Russia claims nuclear use will be its last resort and only be used if it's very own survival was at risk, some experts have expressed their concerns.

Olga Oliker of the International Crisis Group highlights, “A lot of people have questioned whether the bar for Russian nuclear use is as high as its official statements say”. She adds further, with regard to the current conflict with Ukraine, “I think it’s very unlikely that Moscow is just going to lob a nuclear weapon at something.” “Obviously it’s been a week when a lot of people’s assumptions have been challenged but I’ll cling to this one for a while”.

Others, like Jeffrey Lewis, a senior scholar at Middlebury Institute of International Studies, opine that the latest Russian statements might amount to little more than 'nuclear sabre-rattling'.

He says, “Putin has had a pretty bad-news week…those things all make him look weak and the best way to push those headlines down a little bit is a nuclear threat”.

But he still holds that there still is a nuclear risk. He indicates the possibility of miscalculations leading to disastrous results. “What would happen if the Russian warning system had a false alarm in the middle of a crisis like this?”, he enquired. “Would Putin know it was a false alarm? Or would he jump to the wrong conclusion?”

Russia is, on the other hand, trying to justify its aggression on Ukraine on the grounds that Ukraine possesses Soviet nuclear technology and means of delivering these weapons.

Lavrov said that Russia “is committed to its non-proliferation pledge, and is taking every necessary measure to prevent the emergence of nuclear weapons and related technology in Ukraine”.

The world still stands on a dangerous curve and a lot depends on the success of the diplomatic level talks between the countries.