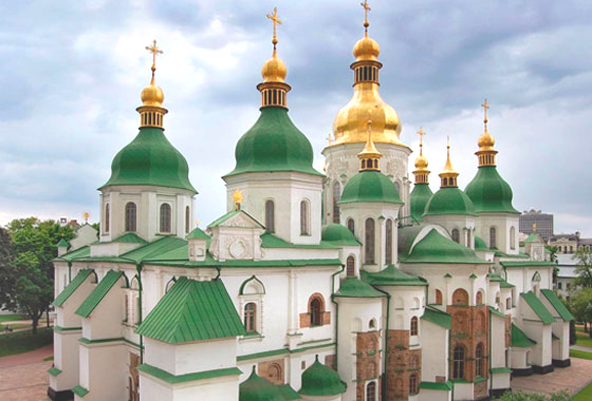 Ukraine is home to a sprawling cultural heritage. It holds sites of major historical, artistic and archeological importance. As of 2022, UNESCO has marked seven World Heritage Sites in Ukraine such as St. Sophia Cathedral in Kyiv and Struve Geodetic Arc. Unfortunately, this rich architectural and cultural history is facing serious issues, and Ukraine is at risk of witnessing the destruction of its cultural identity.

Since the Russian invasion of Ukraine began in February 2022, UNESCO has declared the damage, and destruction of at least 120 cultural sites, including museums, historic buildings, libraries and religious institutions.

The Historical and Local History Museum in Ivankiv was destroyed during the war. The exposition of the museum was devoted entirely to the history and culture of the town. It held artworks belonging to local artists such as the Ukrainian folk artist Maria Prymachenko. It also portrayed the history of the Second World War, and the disaster of Chernobyl. The war has crushed all the history kept in this museum.

The Holocaust Memorial in Drobitsky Yar on the outskirts of Kharkiv has also been shelled by the Russian forces in March 2022. Dmytro Kuleba, the Minister of Foreign Affairs of Ukraine, condemned in a tweet the Russians for damaging the memorial, which marks where an estimated 15,000 Jews were killed by the Nazis during World War II.

“This Menora in Drobitsky Yar near Kharkiv never threatened anyone,” he wrote.

Eighteen other sites were also damaged in the Donetsk region, including Mariupol, a city that has been under the full control of Russia for over a month now.

Some experts argue that Russia is deliberately targeting the architecture and historical sites of Ukraine. These actions are considered as potential war crimes since Russia is among the 133 signatories of the 1954 Hague Convention. This convention states that it is against international law to target cultural heritage and property during war.

Eloundou Assomo revealed that the cultural heritage sites are identified by the blue UNESCO emblem that aims at protecting them from bombardments. He warned that any targeting of these marked places "is a violation of international law."

UNESCO's Director General Audrey Azoulay sent a letter to the Russian Foreign Minister Sergey Lavrov in mid-March pointing out Russia’s obligations on protecting Ukraine’s cultural heritage, and its duty to abide by the international convention. Lavrov responded that Moscow is well aware of its obligations under the convention, and has no intentions of breaching the law. The promises of Lavrov remain true until this day, as none of the Ukrainian sites confirmed as damaged are on the list of UNESCO World Heritage list.

Until this day, the most significant historical sites, such as St. Sophia Cathedral and the Lviv Historic Centre Ensemble, were not impaired during the war. However, some experts believe that the Ukrainian identity is already shattering.

Lazare Eloundou Assomo, director of the UNESCO World Heritage Center, expressed his concern for the loss of Ukrainian identity and history after the war. He asserted that Ukraine’s history and identity stems from its cultural heritage and historical monuments.

The expert expressed her deep concern at the amount of damage inflicted by Russian forces on Ukrainian monuments, museums, and cultural sites, saying that “these are all part of the identity of people in Ukraine; their loss will have a lasting effect.”

Ms. Xanthaki emphasized the importance of respecting and protecting the cultural rights of all individuals, including Ukrainians, Russians, and other members of minorities living within Ukraine, the Russian Federation, and elsewhere. She stated that violations of cultural rights might result in further degeneration and fuel of the existing conflicts.

Since its outbreak, the war in Ukraine has been of international concern. Protecting of the Ukrainian historical monuments and preserving of its cultural identity was the task of international organizations such as UNESCO. This UN specialized agency has taken action within the framework of its mandate to protect the cultural places from bombardments.

Audrey Azoulay, UNESCO Director-General, stated that it falls within the agency’s duty to safeguard the cultural heritage in Ukraine, as it not only portrays the history of the nation but also serves as a catalyst for peace and cohesion in the future.

Within the framework of controlling and assessing the damage done to the cultural sites, UNESCO has been concerned with marking cultural heritage sites and monuments and recalling their special status as protected areas under international law. The agency has also collaborated with UNITAR (United Nations Institute for Training and Research), using satellite imagery for priority sites to determine the scale of the destruction of historic temples and monuments of the World Heritage property.

UNESCO is one of the few actors helping Ukraine in its cultural and identity crisis. Upon the destruction of the iconic Drama Theatre in the port city of Mariupol, Italy has expressed its willingness to help with the reconstruction of this monument. Italy's culture minister Dario Franceschini said on Twitter that they want to help Ukraine in the rebuilding process.

“Italy is ready to rebuild the Theatre of Mariupol. The cabinet of Ministers has approved my proposal to offer Ukraine the resources and means to rebuild it as soon as possible. Theaters of all countries belong to the whole of humanity, "he said.