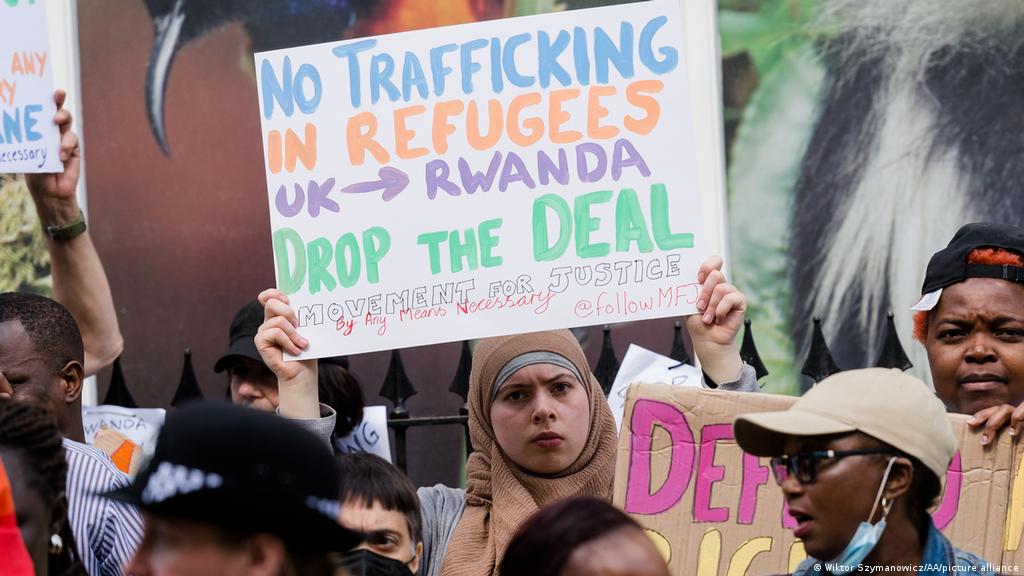 The first flight to take asylum seekers from Britain to Rwanda on Tuesday was canceled, following a ruling by the European Court of Human Rights.

Seven asylum seekers were scheduled to leave the UK on the controversial flight, but informed government sources confirmed that everyone had been taken off the plane and that the flight had been canceled.

Seven people were expected to be relocated to the African country.

This was after a British court ruled that the flight could take place. Earlier, a series of complaints in the UK failed to prevent the transfer.

The flight was scheduled to take off on June 14th at 22:30 British time from a military base in Wiltshire, but after a series of related ballots in Strasbourg and London, all passengers left the flight.

A British Supreme Court justice ruled Friday that Rwanda's transfer policy should be fully evaluated - but it would have exercised its legal authority if British Home Secretary Priti Patel had sent asylum seekers to Rwanda at this time.

According to the ruling, if it turns out that the government's policy is illegal, then they can return to Britain from Rwanda.

British Home Secretary Pretty Patel has expressed frustration with the ban but has insisted the government will not back down.

He said the government was planning to send many more to Rwanda on the next flight.

Rwanda has defended its agreement to accept asylum seekers from the UK, saying it is neither immoral nor punitive.

Earlier, British Prime Minister Boris Johnson said he would not give up on the policy, explaining that the government knew from the start that it would be a "long process" with many legal challenges.

The British government says the policy was aimed at preventing human trafficking through the English Canal, But it is criticized by both British opposition parties and human rights groups.

In a letter, the leaders of the Church of England described the plan as "immoral" and "shameful."

The British Refugee Council also said it was "disgusted by the government's brutal decision."

Médecins Sans Frontières has described the project as shameful and dangerous. The organization said that the implementation of the first cases of the transfer of asylum seekers will mark a dark chapter in the universal rights of refugees.

British charities have called the plan "cruel"; The Archbishop of Canterbury, who presides over the Church of England, also called the plan contrary to the nature of God.

The UK is set to launch a five-year pilot program with an initial cost of 120 million, which will send several asylum seekers to Rwanda in Central Africa.

The plan appears to target most young single men who bring themselves to Britain "in an illegal, dangerous, or unnecessary way", such as using small boats or standing on trucks.

The Prime Minister of the United Kingdom Boris Johnson said that those who have entered the country illegally since January 1st this year, will be included in the scheme without any restrictions on their number.

In this way, Rwanda takes responsibility for those who were sent there. Immigrants are said to be "fully protected under Rwandan law," including equal access to jobs and services.

According to the British Times, the cost of sending each immigrant to Rwanda is between 20,000 and 30,000 pounds.

The British Home Secretary, Pretty Patel, took personal responsibility for implementing the policy after warnings that there was insufficient evidence that the plan was cost-effective.

The Home Office says the's asylum system costs 1.5 billion a year, of which more than 7.4 million a day is spent on homeless immigrants staying in hotels.

But is it legal to send migrants to Rwanda?

A new bill, the Nationality, and Borders Bill is under consideration, giving the government new powers and making it easier for the UK to send refugees abroad to process their asylum applications. The bill is expected to pass the law next month.

But the destination country must be "safe," and the UK is a signatory to two important international treaties guaranteeing the rights of refugees.

The first is the UN Refugee Convention; This convention protects people from being sent to a country where they face a serious threat of death or lack of freedom.

The second is the European Convention on Human Rights; The convention states that no one shall be subjected to torture or inhuman or degrading treatment or punishment. Therefore, if there is a risk of abuse of a person in Rwanda, they can not be sent there.

Mr. Johnson recently described Rwanda as one of the safest countries in the world; Last year, Britain expressed concern about "persistent restrictions on civil and political rights and media freedom" in Rwanda.

Human rights groups have also criticized Rwanda for its treatment of government critics; They point to ill-treatment in detention, and allegations of disappearances and suspected deaths in the country.

The United Nations has an agreement with Rwanda to accept refugees and asylum seekers from other African countries living in Libya.

This is a voluntary project and aims to allow participants to either settle in third countries, return to their home countries, or stay in Rwanda.

In 2018, some refugees from the Democratic Republic of Congo were killed by Rwandan security forces in protest of a ration cut.

In March this year, more than 3,000 people arrived in the UK in small boats, up from 831 in March last year. In total, 4,500 people have entered the country this year through the English Channel.

According to the British Border Guards, the total figure will be much higher this year.

Many immigrants crossing the English Canal apply for asylum after arriving in the UK. Asylum seekers hope to receive asylum, meaning they can stay in the UK.

The British Prime Minister plans to announce plans to hand over operational control of the canal to the Navy to combat human trafficking gangs.

Mr. Johnson said the move was part of his long-term plan to "restore illegal immigration control" after the Brexit.

Gillian Triggs, Assistant Secretary-General of the United Nations High Commissioner for Refugees, said the plan could be effective as a deterrent, but "there are much more effective legal ways to achieve the same result."

However, the British government has promised to regain control of its borders after the election, and British Home Secretary Priti Patel argues that no one else has come up with a solution to the refugee problem.