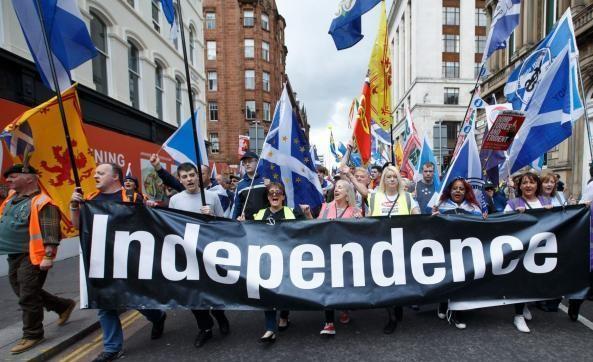 In a statement, Sturgeon said that the democratic rights of the Scottish people are paramount. The people have the right to decide the future sovereignty of their country. She also said that Scotland had already paid the price for not becoming independent.

Scotland was historically an independent kingdom before being occupied and ruled by England for hundreds of years. 1707 saw Scotland and England merge to form the Kingdom of Great Britain, which has been part of the UK ever since. Eight years later, the Scottish government has formally proposed a second independence referendum on the same issues as in 2014, and Sturgeon says he will then negotiate with the UK central government on the legal terms of holding the referendum.

As for the reasons for another referendum in Scotland, Sturgeon, in her statement, pointed directly at the Boris government, arguing that it was the Boris administration's move that jeopardised the interests of the Scottish people. In the statement, she said, "The Conservatives have only six MPs in the Scottish Parliament, yet they are taking Scotland out of the EU against our wishes.

Sturgeon appears very determined about this independence referendum. According to the Guardian, Sturgeon sent a private letter to the Scottish National Party's 119,000 members on June 28, setting out her plans for a second referendum next year and calling on party members to start campaigning for it. She believes that "the Conservatives are intent on starting a trade war. Our young people are being denied opportunities. We cannot restore freedom of movement, and tens of thousands of children may be forced into poverty because of Boris, but our country is supposed to be better off."

Under Section 30 of the Scotland Act, passed by the UK Parliament in 1998, the power to hold a referendum can be temporarily transferred to the Scottish government if the UK government agrees - which is exactly what was done in 2014 when Scotland held its first independence referendum and was Sturgeon's first option.

But if the Boris government does not agree, Sturgeon said she would also move to keep pushing her plans forward. The attitude of the Boris government is clear. Prime Minister Boris reportedly said on 28 June that he would look closely at Sturgeon's proposals and respond appropriately, but that he believed the UK's focus should now be on "building a stronger economy".

Sturgeon said Scotland would not hold an unauthorised referendum because it would be ineffective and the result would not be recognised by the international community.

If the result of the referendum shows that the majority of people support Scottish independence, then the Scottish and British governments will formally open negotiations, after which the British and Scottish parliaments will pass the relevant bills for independence, and then Scotland will be considered truly independent.

According to commentators, if Scotland were to become independent, it would be the biggest shock to the UK since Ireland became independent a century ago.