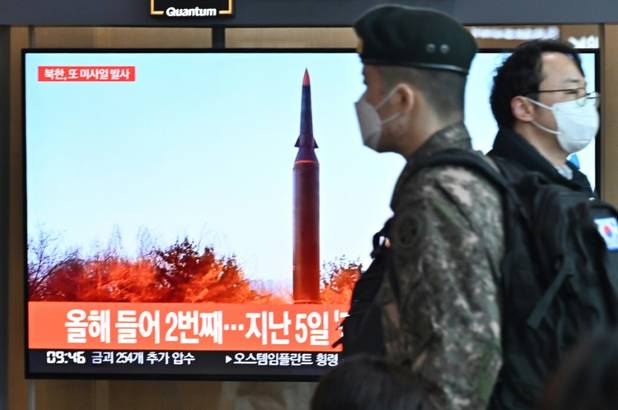 After Pyongyang tested a hypersonic weapon, North Korea is under suspicion of firing a second ballistic missile into the waters of its eastern coast, intensifying tensions due to the stalled nuclear talks by Kim Jong Un. South Korea and Japan released statements that the “ballistic missile-like object” was fired at around 7.27 am (22:27 GMT on Monday) today, as suspected by Seoul’s Joint Chiefs of staff and Japan’s coast guard. It travelled about 400 miles at an increasing speed of 10 times the speed of sound (12,348 kmh/7,673 mph).

According to the government sources in Tokyo, reported by the Kyodo news agency, the projectile seems to have landed in the exteriors of Japan’s exclusive economic zone (EEZ). Japanese Prime Minister Fumio Kishida has shown immense regrets about North Korea’s continuous actions to launch missiles. Even the emergency meeting called by Seoul’s National Security Council expressed “strong regrets” over the test.

The latest launch took place after the six countries urged North Korea to mark an end to “destabilizing actions” ahead of a closed-door meeting conducted by the United Nations Security Council, which condemned the test of hypersonic weapons. The council resolutions banned the testing of any nuclear or ballistic missile tests and imposed sanctions on North Korea over any such programmes. However, the new testing has ratcheted peaceful talks.

South Korea and Japan, including the other four countries- France, UK, Ireland and Albania also signed the statement but North Korea’s actions have increased the risk of threat to regional security, which has to be calculated tactfully by the joined forces of the United Nations Council. The improved capabilities of North Korea escalate the significant risk of offering illicit arm dealers and clients globally, as stated by Linda Thomas-Greenfield, an U.S. Ambassador.

The Denuclearization talks have been stalled between North Korea’s President Kim Jong Un and former U.S. President Donald Trump since 2019. Although Trump’s regime collapsed, Kim continued to develop new nuclear weapons and arsenals, along with systems specially designed to avoid any interference from the U.S. and its allies.

Furthermore, Kim recently marked his interest in the top ruling party meeting. He propelled to strengthen his arsenal capabilities than attending nuclear talks with the US. He urged North Korea to focus on easing food shortages than disarmament talks. Containing Covid and denuclearization talks stand as a low priority in the upcoming months. His goal is to modernise North’s military.

In recent months, Kim’s regime has tested various weapons like a long-range cruise missile, a system to launch ballistic missiles equipping train carriages and submarine missiles. Although Kim has significantly expanded the arsenal capabilities of the nation, the economy has shortened compared to the one during the regime of his father, Kim Jong II. It is mainly because of the multiple sanctions imposed on Jong Un to punish him for featuring continuous testing of weapons and missiles.

While China and Russia are advocating the United Nations Security Council to relax sanctions by removing a ban on North’s exports, Thomas Greenfield urged nations to continue imposing sanctions to increase pressure on Kim.

In recent updates, North Korea has agreed to negotiations on the condition of dropping “holistic policies” like sanctions and military drills by the United Nations and other countries. North Korea argues that its military activities do not impose a threat instead it is a simple measure taken by any other country.

A few observers want Kim to surrender fully and drop the testing of weapons and missiles to settle peace wholly. However, Pyongyang is finding its way out by challenging international sanctions while the council remains divided.