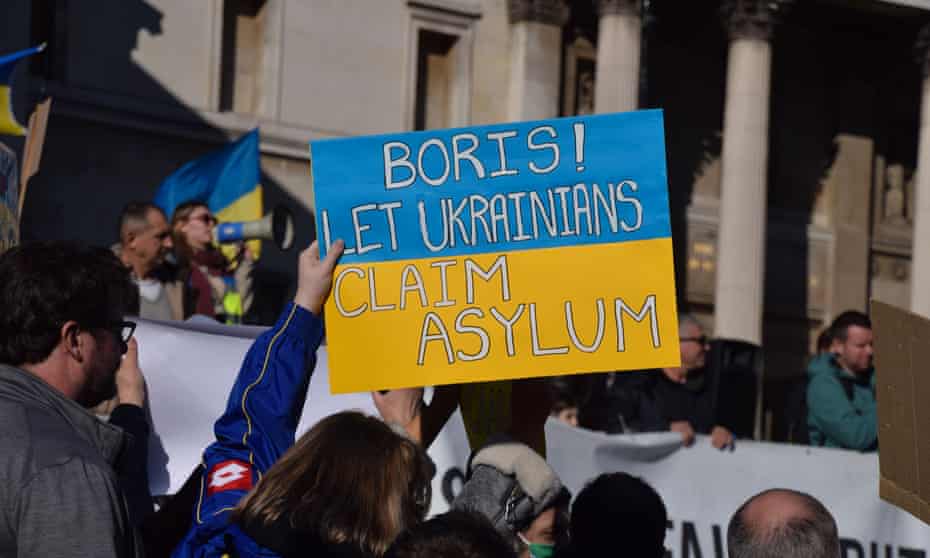 Since the Russian invasion on 24 February, the UN has calculated a total of 2.3 million displaced Ukrainians desperately searching for sanctuary and this number could rise to 5 million should the impact of the invasion worsen. In response, many European countries have opened their borders to thousands of refugees, even over a million in Poland's case.  Few countries however require a visa upon entry and the UK is the only European one to do so. Yet, Britain has a long history of welcoming those that seek refuge from war and persecution so why is the government not doing more to alleviate the humanitarian crisis?

On 4 March, Britain introduced The Ukraine Family Scheme permitting entry only to immediate and extended family members of British nationals once they have acquired visas. Under the Local Sponsorship Scheme, Britons will soon be able to open up their homes to those that are eligible and in need of a place to stay. Hosts will be provided with £350 in support of this relief. However, the eligibility of the Family Scheme prevents Britain from helping thousands that do not have these pre-existing connections to the country and the process of applying for visas to take advantage of the scheme has been said to be tedious and inefficient. Pop-up visa centres in and around Ukraine are reportedly understaffed and vulnerable people are required to fill out complicated forms and rarely have a place to sleep during the process.

The impact of the scheme is little in comparison to the relief provided by its European counterparts.  Up to 10 March, it was recorded that the UK has issued a mere 957 visas to Ukrainians making up for 0.001% of the population. Other European countries on the other hand have taken in far more. Those who share Ukraine's borders and are on the frontline of the crisis have welcomed an equivalent of approximately 2-4% of their population. For example, Hungary has permitted entry to 214,000 while Poland has taken in 1.4 million. Other countries of the Schengen Area that have opened their borders include France, Spain, Germany, Luxembourg, Greece, and Croatia.  Despite its geographical separation, Ireland has announced an immediate waiver of their visa requirements and has since welcomed approximately 2,200 refugees.

Over the last hundred years, Britain on many occasions has offered refuge to those endangered by war and persecution and we therefore find ourselves asking why Britain is now taking a step back, not the lead, in an international humanitarian effort to relieve those affected by the war. During the First World War, Britain offered sanctuary to 250,000 Belgians following a sudden German invasion despite the government looking to pass panic legislation to prevent entry to German citizens. Leading up to the Second World War, Britain organized a rescue effort known as 'Kindertransport' that moved thousands of vulnerable children who sought refuge from Nazi occupation. Up to 15,000 unaccompanied children, predominantly German-Jews, were saved and received sanctuary on the island. Arguably a more relevant example to the ongoing 'east versus west' hostility is the refuge Britain offered to the 11,000 Hungarians as a result of Soviet occupation and social unrest in 1956, five per cent of the total number of evacuees. Moreover, Britain’s history of refuge highlights the economic benefits of immigration and extends beyond victims of war. In 1948, Britain received almost 500 Caribbean immigrants on the HMT Empire Windrush who sought a life of prosperity in rebuilding Britain's post-war economy.

So why aren't we doing more?

Britain's approach to immigration has since changed, Brexit being a key factor. As of 1 October 2021, EU, EEA, and Swiss citizens cannot enter the UK with a national ID card and must have settlement status or a family or work permit. These stricter policies on immigration were implemented to tighten border control, discourage immigrant influxes, and declare an isolationist position disconnected from the EU. Since the war began, Boris Johnson and his cabinet continue to enforce strict security checks and refuse to ease border control in the interest of national security. The government has said to have received warnings of Russian infiltration as individuals will attempt to enter the country disguised as Ukrainian civilians, to carry out attacks on British soil.  While the Family Scheme would reduce the likelihood of this threat, these are arguably spurious grounds on which to limit entry to Ukrainians in the interest of maintaining Britain’s strict border control, in line with Brexit policy. Furthermore, the UK is the only European state dictating their approach to the crisis by this security concern, further implying these grounds are intended to satisfy a Brexit-related agenda more so than anything else.

In recent days, Putin's aggression continues to escalate and has since bombed a maternity hospital in the port city of Mariupol which President Zelenskyy has deemed 'genocidal'. Yet, the only amendment to the UK's efforts so far is an improvement to the visa application process for those eligible to come to the UK. On 10 March, Home Secretary Priti Patel has announced that, from Tuesday, Ukrainians may apply for entry online but stated that 'vital security checks will continue on all cases' and all current visa rules remain applicable. Eligible Ukrainians will no longer need to provide biometrics at a visa centre before arrival and Patel has described this as more 'streamline'.

Despite this, Johnson's government has been criticized for not doing enough and has faced backlash from many MPs and members of the public. Last Saturday, hundreds of protesters outside Downing Street demanded more to be done in support of Ukraine as well as calling for a no-fly zone. In Parliament, SNP MP Ian Blackford told Johnson that the UK 'stands alone' in refusing to take similar measures to its European counterparts and this is a moment for Europe 'to stand united'. Blackford told the House that party leader Nicola Sturgeon is ready to open the country's borders and offer sanctuary to those fleeing war as soon as the government decides to do so.