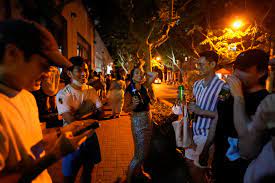 Shanghai is officially back to freedom. After two months of lockdown, public transport was restored this morning (1st of June), and companies began operating again without a 'white list.' Celebrating the result (in the last 24 hours, there were only 15 positive cases), the municipal government promised that it would 'do everything possible to make up the ground lost during the outbreak.'

With the barricades lifted, some 22 million people, 90% of the population, will be able to leave their compounds and access public services by testing negative. Residents of China's largest and most cosmopolitan metropolis can finally leave home, return to work, use public transportation, and drive their automobiles freely - a moment that many in Shanghai thought would never come.

Pictures circulated on the net show people celebrating in the streets, having picnics on grassy stretches earlier, and youngsters were riding bikes down carless roadways. Dancing elders, a typical nightly sight in Chinese cities, strutted their stuff in open-air plazas and along the Huangpu River for the first time in months.

Shanghai Disneyland, which has yet to declare a reopening date, broadcasted a light show to "celebrate the lifting of Shanghai's lockdown" via Livestream.

Barbers supplied haircuts to residents who had grown scruffy due to the lockdown under the light of streetlamps. Shops advertised their reopening intentions on the WeChat social media network.

The worst seems to be over. But it remains to be seen whether and how the tragic handling of the first few days will affect the public reaction in the long run: from an economic perspective, analysts doubt there will be a rapid recovery in consumption.

The Chinese government has set aside 300 billion yuan (US$45 billion) in tax exemptions, financial incentives, and investment to help the city regain economic growth after its lockdown strained supply networks from Europe to Japan and pushed thousands of firms to the brink of bankruptcy.

Even more difficult to predict is the impact of the epidemic crisis on the party's credibility. Until now, Beijing has been able to use its tight control over the virus to cement its legitimacy. But with the international context now almost at pre-pandemic levels, it is increasingly difficult to argue the superiority of the Chinese model.

The dilemma of the Chinese film industry in the face of pandemic: Shanghai International Film Festival suspended

China: The era of “Do Not Travel Abroad Unless Necessary”