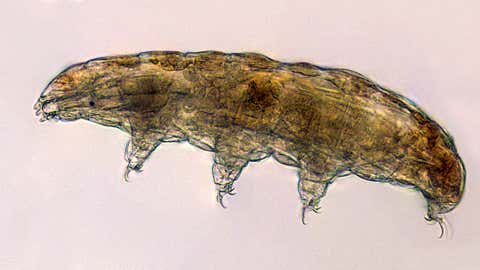 NASA. The independent space giant known for its space exploration and innovative research programs declared a new project which made the world turn its heads towards the National Aeronautics and Space Administration, USA.

On the 3rd, June 2021, NASA announced that it sends 128 glow-in-the-dark bobtail squids and around 5,000 tardigrades(water bears) to the International Space Station(ISS) for research purposes. The research involved two main agendas. One, to test the survival of microscopic organisms under outer space, conditions. Two, animal-microbe interaction in zero gravity. The ISS is technically a space station in low Earth orbit, which looks nothing different from the movies Interstellar and Gravity.

It consists of a laboratory that allows astronauts to perform various tests and experiments to study and gather data in microgravity. And this space invasion was one of those experiments. The mighty Elon Musk's baby SPACEX prepared itself for the exciting journey to take a gallop in the field of biotechnology. The news spread like wildfire across the world and made it to the front page.

But why did the program gather the front-page attention?

Water bears. Yes. You heard it right. Found everywhere in Earth's biosphere, the fluffy microscopic entities stood the test of time. Come rain or snow, these resilient tardigrades adapted and survived in extremely harsh conditions. Thus a hero NASA was looking for was found.

The research was named Cell Science-04, and it requires the study of these microbes under conditions such as microgravity and increased radiation levels. The main aim of the experiment is to help determine, provide a better guide and steer the humans during long space expeditions. A two-month-long experiment on the ISS targets the tardigrades and their behavior in space. Once the investigations start, the frozen water bears will be brought, back to life for further study.

As a preliminary step here on the ground, the NASA Ames Research center in California performed various long-term studies on the nature of the tardigrades. This research involved the study of cell structure and its culture, tissue architecture, and reproduction. The entire experiment took place in a simulated environment, which provided a significant groundwork for the Earth-based research.

Further, once the data from space reaches the Earth, the two will be compared, and the result deduced.

Thomas Boothby assistant, professor at the University of Wyoming and a key investigator of the experiment explained, “One of the things we are keen to do is understand how tardigrades are surviving and reproducing in these environments and whether we can learn anything about the tricks that they are using and adapt them to safeguard astronauts.”

Apart from water bears, another hero offered himself to participate in this space research by NASA. The bobtail squids. Also known scientifically as Euprymna scolopes. The squids are a host to a specific type of bacteria called Vibrio fischeri. The mutual relationship shared between the two gave birth to a phenomenon called mutualism. Mutualism is defined as an ecological interaction between two or more species. While the squids benefitted from bioluminescence, the microbes took advantage of the squid's body and made it their home.

Similarly, humans share a relationship with some microbes, which play a vital role in shaping our immune system and digestive system. An attempt to understand the intricacies of the biological torso is not an easy task. After all, we Homo Sapiens are the most complex creatures on Earth. Hence, with the help of these baby squids, NASA and its researchers are trying to decode the complex problems posed by the symbiotic relationship between astronauts and the microbes. The research may provide valuable data to understand and preserve astronaut health on long-duration space expeditions by genetically modifying the underlying bacterium.

Researcher Jamie Foster, who completed her doctorate at the University of Hawaii, said, "There are aspects of the immune system that don’t work properly under long-duration space flights. If humans want to spend time on the moon or Mars, we have to solve health problems to get them there safely.”

The Kewalo Marine Laboratory at the University of Hawaii is a breeding ground for these squids. The laboratory stretches its hand to provide these squids for research projects around the world. The tiny animals are plentiful in Hawaiian waters and are about 3 inches (7.6 centimeters) long as adults.

The experiment is called UMAMI. An abbreviation for understanding Microgravity on Animal-Microbe Interactions. The principal investigator and the person in charge, Jamie Foster, professor in the department of microbiology and cell science at the University of Florida is keenly following the proceedings. She is eager to see how the baby squids and their microbes communicate with animal tissues in outer space. The development of this experiment also involved Margaret McFall-Ngai of the University of Wisconsin-Madison, the Florida Space Grant Consortium, and students from Milton Academy in Massachusetts and Merritt Island High School, Florida.

The experiment involves exposing the squids to a certain bacteria once they are onboard the ISS. Various tests will be performed, and the results recorded relative to the behavior of the bacteria with the animal tissue in microgravity. Once the experiment is complete, the squid larvae will be subjected to euthanasia, and the samples collected will travel back to Earth for further scrutiny. Reports suggest that the squids will fly back to Earth in July.

A new leap in the field of science is ready to unfold, thanks to these tiny microscopic heroes. With the help of the experiment results and its data, researchers may derive a conclusion for the astronauts to survive in tough space conditions and develop a health system to endure long-duration space missions. Indeed Homo Sapiens are the most complex creatures and intelligent of them all in the world.

Living on Mars isn’t far-fetched now, is it?