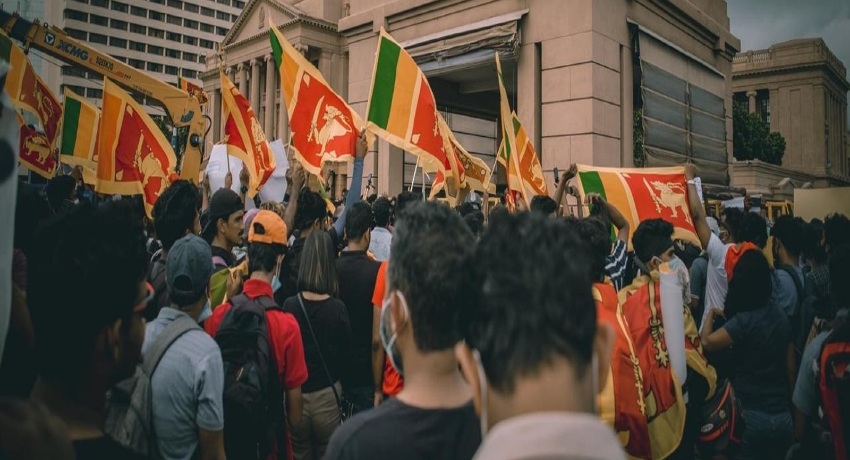 Thousands of Sri Lankans are taking to the streets demanding the resignation of Sri Lankan President Gotabaya Rajapaksa as the country is facing its most severe and unprecedented economic crisis. Furious over the food shortage, inflation, power cuts and the government’s handling of the crisis, unrest continues to spread among the citizens. The protests began on March 16, 2022, but the economic crisis had its origins way earlier.

The Reasons For Economic Crisis And Protests

Sri Lanka has turned into a twin deficits economy, where national expenditure and imports exceed the national income and exports respectively, due to multiple reasons.

The primary cause was the country's ignorance towards its millennium-old international trade to focus on domestic policy. Thus, the decline in exports also affected the growth of Sri Lanka’s GDP. This also led to a decrease in foreign reserves as they were importing in large amounts which kept increasing and exports were dwindling as time went on. Sri Lanka’s dependency on imports grew as they imported more and more essential items like pulses, sugar, and others. The second issue was the loss of revenue due to tax concessions which further let down the economy and increased the deficit and inflation. To offset the government’s spending, the nation printed more money thus further causing a rise in inflation.

The third cause, the most impactful one, is the COVID-19 pandemic as well as the 2019 Easter blasts in Sri Lanka which led to the tourism industry being hit. Tourism is one of the major industries in Sri Lanka leading to greater ramifications for the Sri Lankan economy. Since importing chemical fertilizers took up a huge amount, the Sri Lankan government decided overnight to forbid chemical usage in farming and bring about organic farming all over the nation. This created a food shortage and inflated the already rising prices of food. Sri Lanka from being self-sufficient in rice went on to import rice with losses in farming produce leading to huge economic losses. Sri Lanka’s debt management had plummeted the foreign reserves by 70%. Also, the President’s brothers Basil and Mahinda Rajapaksa both had occupied prominent posts in government as Finance Minister and Prime minister respectively. This created a feeling of nepotism among the people. Along with the evidence and suspicion of corruption, the dissatisfaction of people intensified.

In February, the public debt of Srilanka had already reached an ‘unsustainable level’, as quoted by the IMF. With the foreign reserves which are now at $1.93 billion and the debt repayment being around $4 billion in 2022, the situation for Sri Lanka seems dire. The people are desperate as the rising inflation creates unlivable conditions and the sense of dissatisfaction is increasing.

The deteriorating situation of the economic crisis along with the mismanagement and hasty decisions by the Sri Lankan government has caused the citizens to rise in protest.

It began with the opposition party Samagi Jana Balawegaya (SJB) leading the protest for tens of thousands in front of the President’s office in Colombo on March 16, 2022. The demand was for President Rajapaksa to resign. On March 30, 2022, when the son of Prime Minister Mahinda Rajapaksa, Namal, went for an opening ceremony in Bandarawela, the local citizens blocked his way with demands for fuel. Utimately Namal Rajapaksa could not attend the opening ceremony.

The protest gained new popularity on March 31 when thousands of protestors peacefully demonstrated at the President’s residence in Mirihana, Colombo. Sri Lanka continues the demand for resignation. The protest turned violent when the police attacked the demonstrators with water cannons and tear-gassed the protestors. The protestors burnt two buses and a police jeep, hurled stones and burned tires to block the main Colombo highway. 50 were injured and 45 were arrested. Curfew was declared which was removed the next day, but the presence of police and army had increased in the city.

On April 1, a State of emergency was declared by the Sri Lankan President, as the protest gained even more momentum with powers allowing to detain or even arrest protestors. President Rajapaksa defended the emergency, stating that it is for the “protection of public order and the maintenance of supplies and services essential to the life of the community”. Soon, on April 3, a nationwide curfew was announced for 36 hours and troops were deployed. Many tried to defy the imposed curfew and continue to protest. Over 600 were arrested. There was restricted access to social media, ordered by the government, but the access was granted soon. The Srilankan cabinet, all except the President and the Prime minister, resigned at a night meeting on April 3, 2022.

As the situation worsens, the President tried to unite the opposition with an offer to share power along with his brother Mahinda (current Prime Minister) but this offer was rejected unanimously. As trading is halted on the Sri Lankan stock exchange, the Governor of the central bank resigned. A new finance minister was appointed, Ali Sabry, who immediately resigned just a day after, as the protests strengthened. The President lifted the state of emergency as he lost the parliamentary majority, with even former allies pushing him to resign.

Chanting “Go Home, Gota” and “Go Gota Go”, the protestors have turned the area of the President's office into a protest camp. Hundreds have occupied the site of the waterfront Galle Face since April 9. This resistance camp is the largest protest yet. Social media, as well, has been rampant with trending hashtags like #GoHomeGota, with many popular Sri Lankans- cricketers, celebrities, activists, etc, raising their voices and supporting the protests. Despite jammers being installed, the protests have made their presence felt online as well, with hashtags going viral with support from every class of Sri Lankan, from youngsters to the elderly.

The protesters have created a small village itself at the protest site, with volunteers providing essentials. Despite the weather conditions, the protestors have not faltered. Placards can be seen everywhere, with various slogans such as "Country is for sale, Gota fail", "Give us our stolen money back", "This is our country, not your ATM" and many more.

President Rajapaksa has tweeted and his office has also released a statement that he is willing to talk and negotiate with the protestors. But some protestors have responded that they would only leave when the President quits.

The Occupy Galle Face protest is still ongoing, currently on its seventh day, with protestors refusing to leave until their demands are fulfilled. Braving rains and thunderstorms, the protest campsite has remained peaceful. Calling the site Gotagogama meaning in Sinhala as Gota Go Village, this site is supporting all the protestors with their necessities like water, food, toilets, etc. through volunteers, including a library to share knowledge, and a college providing education for the students who came to protests. They have managed their campsite well. Along with celebrating Sinhala and Tamil New Year at the campsite, the protestors have prepared and braced themselves for the long haul.