Sri Lanka is in a state of crisis. The president, Gotabaya Rajapaksa, has fled the country. 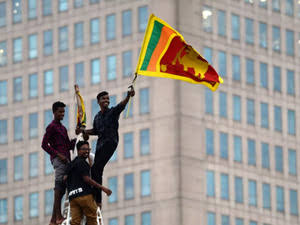 The president had been widely criticized for his handling of the ongoing civil war between government forces and Tamil separatists. He has been accused of human rights abuses and of using heavy-handed tactics to quell unrest in the country.

Today's news is only the latest in a series of events that have left many people in Sri Lanka feeling as if their country has been turned upside down by political instability.

In July 2011, President Mahinda Rajapaksa was elected to office with 99% of the vote—an unprecedented level of support for any politician in Sri Lanka's history. However, just months after he took office, violence broke out between government forces and Tamil separatists who were seeking more autonomy from Colombo. The conflict lasted nearly five years before ending with an agreement that granted limited autonomy to Tamil-majority districts in exchange for an end to hostilities between government troops and separatist rebels.

Sri Lanka's Gotabaya Rajapaksa, who was the president of Sri Lanka since 2005, has fled the country after facing a rebellion by the Tamil Tigers. The Tigers are a separatist group that has been fighting for independence from Sri Lanka.

The news of Rajapaksa fleeing came as a surprise to many people because he had been against any attempts to remove him from power. This means that there is going to be an election in Sri Lanka. If a new president is elected, there will be a power shift and we can expect more changes in policy toward Sri Lanka's Tamils.

After the Sri Lankan government's defeat of LTTE rebels, it was widely expected that Gotabaya Rajapaksa would be named Prime Minister. However, he has now fled the country after facing allegations of corruption and mismanagement.

The country's president has fled the country, and the government is asking for help from the international community to bring about stability.

It all started with a coup d'état.

Sri Lankans were shocked when the president of Sri Lanka, Maithripala Sirisena, suddenly stepped down from his position and fled the country. This came as a shock to many people because Sirisena had been in office for seven years and was very popular among Sri Lankans.

Sirisena's sudden departure has left the country facing a lot of uncertainty about what will happen next. The government currently has not appointed another president or leader, so there is no clear plan on how to move forward with the country's political situation.

It's unclear what will happen next for Sri Lanka, but there are some things that we can do right now to help stabilize this situation and prevent further violence from occurring. First off, we should make sure that any money donated by foreigners who want to help out during this time is monitored closely so it doesn't get into the hands of criminals or corrupt politicians or anyone else who might use it for something bad like terrorism or war crimes against innocent people here in our country!

Why Sri Lanka’s Crisis Has No Silver Lining.