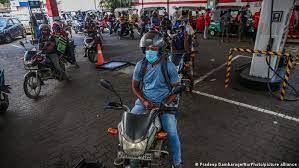 In Sri Lanka, President Gotabaya Rajpaksha declared a state of emergency on April 1. After widespread protests by outraged locals over the mishandling of the problem, he withdrew it in less than a week. Thousands of people took to the streets, while government ministers resigned en masse.

For many days protesters occupied the governor's office doorway, demanding that President Gotabaya Rajapaksa and his influential governing family quit the financial downturn. The protests have spread throughout the country, with protesters blocking roads with their cars.

The island nation of the Indian Ocean, inhabited by 22 million people, is facing the worst economic crisis since the country gained independence in 1948.

Sri Lanka is on the verge of default, with roughly $7 billion of its entire $25 billion worth of debt due this year. Due to a chronic scarcity of export earnings, the economy cannot purchase imported commodities.

Food, heating gas, petrol, and medications have been in short supply for months, with Sri Lankans queuing for hours before getting the minimal supplies.

In recent months, gas prices have increased repeatedly, leading to significant rises in transportation costs and other commodities prices.

The administration has stated that repayment of foreign loans will be suspended pending the talks with the IMF.

According to the country's minister of finance, Sri Lanka will get $300 million to $600 million from the World Bank over the next four months to purchase pharmaceuticals and other necessities. The Indian Ocean island faces perhaps the worst financial recession in years.

Finance Minister Ali Sabri, who is in Washington to arrange a bailout with the International Monetary Fund, states in a video conference that negotiations with the IMF may require more time but that the World Bank has offered to assist.

Sabri added that bordering India has offered to procure $500 million for fuel purchases and that talks are ongoing for an extra $1 billion from New Delhi, which has previously provided a $1 billion line of credit.

Many people believe that Sri Lanka's economic ties with China are a significant cause of the issue. The United States has coined "debt-trap diplomacy" to describe this occurrence. When a creditor country or institution advances debt to a lending entity to boost the borrower's negotiating clout, the lender is at the creditor's discretion whether they can repay the debt.

In 2020, however, Chinese loans represented only around 10% of Sri Lanka's total foreign debt. International government bonds account for the majority of the money - roughly 30%. Japan is responsible for a more significant percentage of the country's foreign debt, at 11%.

Downgrades on Chinese infrastructure credit to Sri Lanka, particularly the funding of the Hambantota port, have been mentioned as significant factors.

These factors alone do not add up to the importance of the actual crisis, so what are the real reasons for the situation?