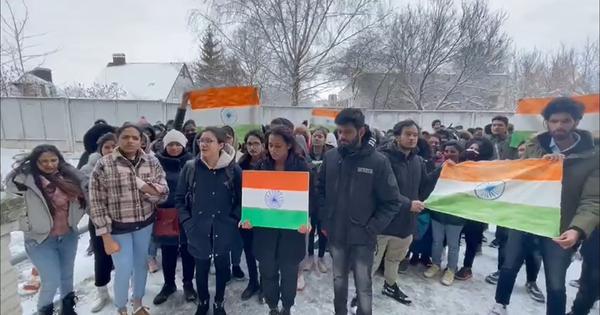 India's Foreign Ministry said that it has put extreme pressure on the Russian and Ukrainian governments through multiple channels. It aims for an immediate ceasefire to create safe passage for its Indian students stranded amid the ongoing war in Ukraine.

It also claimed that the ministry and Indian embassies are in regular touch with all the Indian students. They have posted desperate and emotional pleas on social media to evacuate from the conflict-stricken war zone.

This comes soon after Indian students stranded in northeast Ukraine's Sumy city shared videos saying they had decided to take a risky journey to the Russian border, around 50 kilometers away.

In their last video from Sumy City, the Indian government and its embassy in Ukraine are responsible if anything happens to the students.

However, all the students decided not to leave after being contacted by the embassy.

In the video from the Sumy State University campus, a large group of students is standing in the snow. Packing their bags, and preparing to leave in a rush. They also hold several Indian flags in their hands.

Since this morning, we had listened to boarding, shelling, and street fights. We are afraid. We've waited a long time, and now we can't wait another second. We are risking our lives by moving towards the border. If anything happens to us, all responsibility lies with the government and the Embassy of India. If something happens to any student, Mission Ganga will be a failure.

Please pray for all of us. This could be our last video, "another student adds."

They have no lead for an evacuation and have already issued an appeal to the Indian government and Prime Minister Narendra Modi, saying, "We'll all be killed."

"Nothing has been done for us. I've seen some international students leave Sumy City on their own, but they were shot and killed. Behind him, there were more than a hundred students,  looking worried and tense.

The Indian embassy issued a warning last week of possible intense fighting in Kharkiv, Sumy, and Kyiv. Reports suggest that trains and buses have stopped running in Sumy. Roads and bridges have been destroyed by the Russians. There is heavy street fighting going on.

Russia today told the United Nations Security Council that Russian buses are ready to evacuate Indian students and other foreigners stuck at the crossroads of eastern Ukraine's cities of Kharkiv and Sumy.

The Indian ministry in Ukraine announced today that it is looking into "all relevant options" to safely and securely remove them from the war zone. In a tweet early this morning, it said it had discussed evacuation and the identification of exit routes with all interlocutors, including the international humanitarian organization Red Cross.

"Searching for and identifying all possible solutions for safely and securely relocating any Indian residents who are stranded in Sumy City." We have planned the evacuation of students and the allocation of exit ways with all concerned parties, including the Red Cross.

The command center will remain operational until all of our people have been evacuated.

At least 1,000 Indians remain stuck in combat situations in eastern Ukraine. With 700 in Sumy and 300 in Kharkiv, according to the ministry. Arranging buses to relocate them is proving to be the most difficult task at this stage.