Taiwan is set to retaliate a full Chinese Invasion: Report 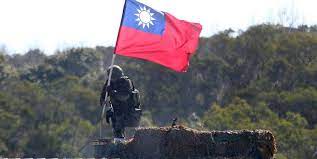 In the latest military assessment, Taiwan’s defence military claims its preparedness to counter a full invasion of the island by Chinese forces.

Differences between Taiwan and China have existed for decades due to the political status and administration of Taiwan. Taiwan, officially known as the Republic of China (ROC), was established in 1949, after China’s civil war that led to its subsequent split.

At the end of the Second World War in 1945, Japan transferred Taiwan's administration to China. In 1949, with the outbreak of the Chinese Civil War, Taipei, the capital of Taiwan, was established by the Kuomintang government (KMT), who retreated to the capital, while the Chinese Communist Party (CCP) proclaimed its power in Beijing. No peace treaty has ever been signed to declare the end of the Civil War legally.

Taiwan is separated from mainland China (officially the People’s Republic of China (PRC)) by the Taiwan Strait and is governed independently. Beijing asserts that there is only "one China" and vows to unify it eventually with the mainland, operating force if mandatory. It functions as an approach to the "One-China Principle," which refers to Taiwan’s ultimate unification. On the other hand, Taiwan has differing views on its democratically elected government and the island’s status with the mainland.

Is Taiwan part of China?

Beijing claims that Taiwan is bound by an understanding of the 1992 consensus, which was signed by KMT and CCP leaders, but it never intended to call Taiwan's legal status into question. The PRC interprets the agreement as "working together to seek national reunification," while the KMT interprets it as "one China, different interpretations." Besides, the KMT never favoured the independence of Taiwan and has always tried to maintain close ties with Beijing.

Cross-strait tensions have risen since the newly elected Taiwanese president, Tsai Ing-wen, the leader of the Democratic Progressive Party (DPP), the KMT's main rival, took office in 2016. She explicitly refused to accept the 1992 consensus and instead searched for a more acceptable formulation for Beijing. However, her proposal to conduct cross-strait affairs in consultation with China’s Constitution was rejected by Beijing. In 2019, Xi Jinping's speech proposed the formula "one country, two systems" as acceptable for Hong Kong to safeguard its political and economic autonomy. This framework did not go down well with Taiwanese people. Tsai and the KMT rejected the proposal because they did not want a crackdown like Hong Kong freedom.

How is the United States involved?

The United States is formulated by its "One-China Policy" based on several documents of 1972, 1978, and 1982, and the Taiwan Relations Act of 1979. According to these documents, the United States recognizes China as one nation, and Taiwan is a part of China. It accepts the Chinese proposition of a single nation and rejects any further violence to settle disputes. Since 1979, it has maintained formal diplomatic ties with the PRC and severed an unofficial relationship with the ROC by selling defence equipment to its military. It’s cultural, commercial, and other ties with Taiwan are articulated by the American Institute in Taiwan (AIT). It also upholds the power to come to Taiwan’s defence if needed, under a policy called "strategic ambiguity". Although it claims to maintain peace and stability in the Taiwan Strait, recent developments have shown it’s sideling towards Taiwan.

Under President Trump's administration, more than $18 billion worth of arms were sold to Taiwan, and $250 million was invested in its embassy in Taipei. A lot of senior administration officials also visited Taiwan. The Joe Biden administration has been following the same path. President Biden of the United States is the first American president to invite Taiwanese officials to the presidential inauguration.

Could a war escalate over Taiwan?

China is emerging as a global threat owing to its increasing military capabilities, assertiveness, and declination in cross-strait relations. It has been a severe concern for the U.S., which could spark a U.S.-China confrontation. China has not ruled out military force to achieve its "reunification", and the United States has not backed down from defending Taiwan if China attacks.

Tensions between China and Taiwan have escalated dramatically in the previous two years as China intensifies military operations in Taiwan. However, Taiwan's defence military recently reported its preparation and readiness to combat any force against it. It is reported that China’s capacity to land troops and seize ports and airports has been skillfully limited. The landing would require "non-standard" roll-on operations, which would expose them to extremely high risks.

According to China’s logistics, it could face challenges in resupplying weapons, food, and medicine to the landed troops across the Taiwan Strait. It can even witness foreign intervention while fabricating areas of China’s border with India and the South China Sea. Thus, it would require a backup force in reserve to prevent any such outside forces.

Although China can defeat Taiwan through other means like blockades or targeted missile attacks, Taiwan President Tsai Ing-wen is emphasising a military modernization programme to prepare the island for the attack. She is building a mobile military and missiles with a longer range to counter an attacking force.

A full-scale war could break out anytime soon. Therefore, the government is planning to spend an extra 240 billion Taiwanese dollars on naval weapons, missiles, and warships over the next five years.