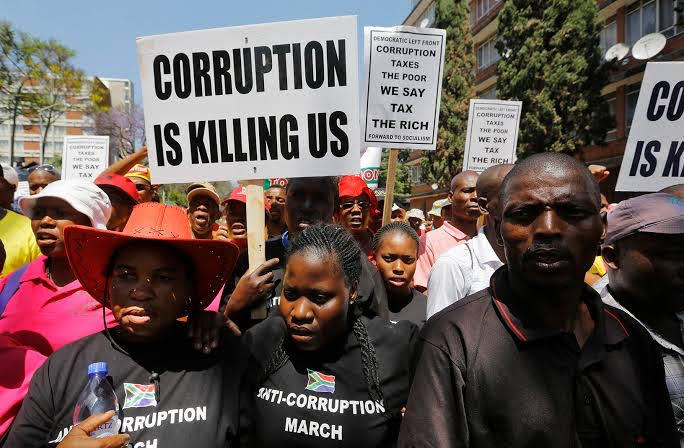 In South Africa, like in various other African countries, the amount of corruption has become increasingly more tangible every day. It has always been prevalent with all the social media campaigns covering the scourge such as #MyHandsAreClean and recently; with the South African President calling out local government corruption at SALGA’s national conference at the beginning of this month.

One cannot help but wonder if it is too late to have conversations of that kind. Infrastructure is worn down and state facilities are nonfunctional. In the previous week, it was reported by doctors and nurses at Chris Hani Baragwanath Hospital that there was no food for patients. The medical staff had to pool together money to buy patients that were at high-risk something to eat. They also went on to receive food donations from charity organizations. Chris Hani Baragwanath Hospital is not only a national hospital serving members of the community and the country at large, but it is also the 3rd largest hospital in the world.

More reports revealed that CHBH was not the only hospital experiencing shortages according to Jack Bloom of the Democratic Alliance. Heidelberg Hospital, in the South of Johannesburg also ran short on supplies and had to source them from other hospitals. This is a pretty extreme but evident example of just how bad things are. If the sick people in the hospitals have to deal with lacking something as essential as bread, imagine how detrimental that is to the general wellbeing of a sick patient at that moment.

So, it seems like a delayed response when the President addressed his delegates earlier this month in what sounds like an effort to curb the self-serving nature of the members of his appointed cabinet. Load-shedding is State-owned. Enterprises and facilities are failing at performing their basic functions. Even educated youth are affected by high rates of unemployment.

Meanwhile, food and fuel prices are rapidly increasing. Poverty for the majority of the country does not seem to decline, resulting in increased crime rates because of hunger.

This has a direct impact on the country's economy. This was evident in the lootings that happened all over South Africa in July 2021, which we are still recovering from.

With elections coming up in 2024, we can only see what the state of the nation will be. A crippled economy with wasting infrastructure and squandering of state resources at an alarming rate, the future of the Rainbow Nation is in crisis.