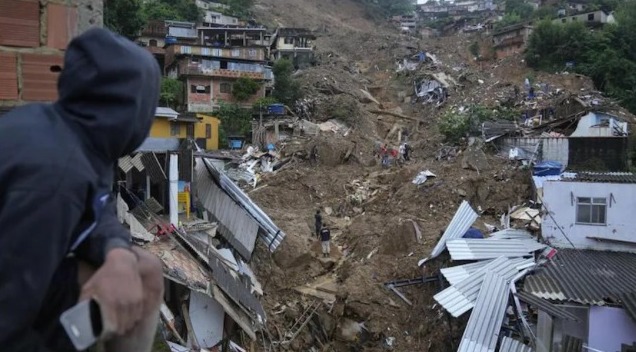 The number of fatalities from the terrible mudslides and floods that surged through a hilly part of Rio de Janeiro state has increased to 78, according to Governor Claudio Castro on Wednesday afternoon.

A flood-hit Petropolis on Tuesday, leaving over 400 people homeless, according to Castro. Throughout the day, searchers crawled through the debris, and 21 individuals were found alive.

Civilians assisted in the official recovery operations. Priscila Neves and her siblings were amongst them, searching the dirt for any evidence of their missing parents but finding only clothes. The Associated Press reported that Neves had given up all hope of ever finding her parents still alive.

Roseline Virgilio, 49, was overcome with emotion as she remembered the passionate pleadings of someone she couldn't help.

"There was a woman who was shouting, 'Help!'" 'Please get me out of here!' But we couldn't do anything about it; the water and sludge were streaming out, "Virgilio told The Associated Press. "Today, our city is destroyed."

Petropolis is a city with German influences that was named after a previous Brazilian leader. For nearly two centuries, it has served as a haven for both residents suffering from the summer heat and visitors eager to explore the so-called "Imperial City."

Petropolis was one of the country's earliest planned areas, with beautiful houses around its lakes. However, its population has developed irregularly, climbing mountain sides that are now extremely dense with little structures. Many are in regions that are inappropriate for construction and have been made more fragile by deforestation and poor drainage systems.

Similar disasters have hit the mountain region in previous decades, including one that caused the deaths of almost 900 people. In the years since Petropolis has produced a strategy to minimize the danger of landslides, but progress has been delayed.

Earlier, the governor told reporters that the situation was "nearly like war" and that he was mobilizing all of the state government's heavy gear to assist in digging out the buried areas.

According to the regional fire department, the area received just over 10 inches of rain in three hours on Tuesday, nearly as often as in the last 30 days combined. The civil defense authorities in Petropolis forecasted and expected moderate rain for Wednesday afternoon and evening.

Posted a video on social media Landslides pulled cars and buildings away on Tuesday, as water surged through Petropolis and nearby neighborhoods. Houses were immersed in mud on Wednesday, while utilities and automobiles were heaped on streets that had been cleared the night before. Some individuals had tried to leave the dangerous slopes.

"The neighbors rushed down immediately, and I provided them with refuge," Emerson Torre, 39, the bar's owner, remembered. However, his rooftop collapsed due to rainstorms. He was able to get his mother and three other individuals out of the restaurant in time, but one neighbor and the person's daughter were unable to.

"It came all at once, like a landslide." As rescue aircraft and helicopters hovered, Torre told the Associated Press, "I've never seen anything like this before." "Every neighbor has lost a loved one, two, three, four members of the very same family, children."

"May God bless their families," Bolsonaro said during a news conference in Moscow on Wednesday.

Southeastern Brazil has been hammered by severe rains since the beginning of the year, with more than 40 people killed in events in Minas Gerais state in early January and Sao Paulo state later that month.