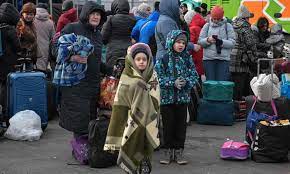 In recent days, an association has published an announcement, presenting itself as the Italian- Ukrainian Chamber of Commerce to ask for cash donations to be paid into a bank account.

But it is fake. Carnival ensures that they do not have any such ad.

The Italian Postal Police in recent days said that online scams, asking for donations to support the humanitarian crisis caused by the war, have multiplied. Numbers of current accounts are published online, especially on popular messaging platforms such as WhatsApp and Telegram, where it is easier to lure those who are less attentive.

In addition to those who try to defraud citizens about donations, some rob refugees directly. There are several reports of Ukrainian citizens relying on strangers to cross the border, who were then robbed.

“The war in Ukraine is leading to massive displacements and flows of refugees - conditions that could lead to a significant increase in human trafficking and an acute crisis of child protection”, said Afshan Khan, UNICEF Regional Director for Europe and Central Asia in recent days. According to the United Nations Organization, from 24 February to 17 March more than 500 unaccompanied children arrived in Romania from Ukraine, but these are low estimates according to UNICEF, which calls for increased controls at border crossing points. That's why the organization has set up some centres called "Blue dots" that provide information to travelling families and help identify unaccompanied children.

In Germany, the destination of several Ukrainian refugees passing through Poland, the local police have raised the level of alert on risk for women being forcefully employed into prostitution.

In Poland, however, an ad hoc emergency number has been created to receive alerts. In the country that has now welcomed more than 2 million refugees, a man was arrested for being suspected of raping a 19-year-old Ukrainian refugee, while some promised housing and a job to a minor before the intervention of the authorities. Polish and Romanian police have arranged checkpoints along the border to intercept suspect vehicles. Several men have already been arrested. It is scandalous that it is often women, colluding with traffickers, who act as a conduit, because they gain confidence more easily.