The New Quad: A New Trajectory in India's Foreign Policy? 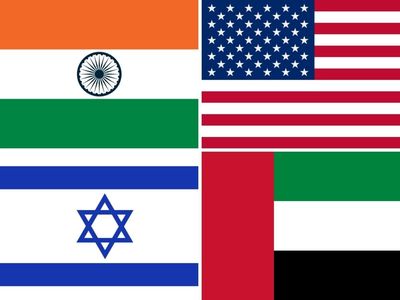 On October 19, India entered into a quadrilateral economic forum with Israel, United Arab Emirates, and the United States to optimize the “unique array of capabilities, knowledge and experience”, shared by them. The new forum has been dubbed as the “New Quad” or the “Middle Eastern Quad” on the lines of Quadrilateral Security Dialogue (QSD), which aims to focus on the issues of trade, maritime security, climate change, and energy.

Last month, a trilateral meeting was held between UAE-US-Israel to further operationalize the Abraham Accords, signed in September 2020, and to underline their relations after years of conflict. The three also talked over the Joint Comprehensive Plan of Action (JCPOA) or Iran Nuclear Deal to bring Tehran back into the geopolitics. India later joined the forum when External Affairs Minister S Jaishankar and Israeli Minister Ayelet Shaked held a virtual meeting with the UAE and the United Kingdom during Jaishankar's official visit to Israel.

India’s foreign policy has always considered geopolitical alliances. It has primarily focused on maintaining bilateral ties with countries for regional gains than investing in multilateral partnerships. The strategic move has helped India to opt-out of any bloc and yet participate in crucial debates that can influence little achievements in its favour. However, there has been a swift change since last year after the border clash with China.

India has initiated to participate globally with multilateral alliances that can work in its favour to counterbalance any security challenges. For instance, India first revived QUAD- Australia, India, Japan, and the United States, to reach a common ground to counterbalance China in the Indo-Pacific region. By becoming a member of the New Quad, it has found its way in the Middle East that will enable New Delhi to expand its role outside of its immediate neighbours. This unprecedented multilateral alliance will help India to enlarge its horizon on a global level.

With the new groupings, India is projecting its readiness for a major role in the global order. It is now ready to move beyond the bilateral ties held in silos.

How the change in regime works in favour of India?

Unlike Southeast Asia, the Middle East constantly faces regional conflicts overnight, leading to massive military challenges. Although, a regime change is working to bring some peace in the region. The new government in Israel is trying to settle the conflict with Palestine. The New economic cooperation between Israel and UAE can also benefit India to a great extent. Israel, one of the chief arms suppliers to India, is moreover equipped with advanced agricultural technologies that could help to improve water management significantly. Even UAE can become a primary investor in India’s building infrastructure. Further, with the regime change in the USA, India can deepen its ties with the Middle Eastern countries and have favourable outcomes of the alliance.

Significant benefits of the New Quad?

As per the International Federation of Indo- Israeli Chambers of Commerce, India’s resources, combined with Israeli’s innovation and Emirati capital could bring progress for all three in several areas- from semiconductor design to fabrication of space technology, and not just limited to trade.

Firstly, India’s soft power prevails in the Middle East, with around 8 million diasporas settled there. It can be advantageous for India to extract massive opportunities like Big data, Quantum computing, and enlarging its exports market.

Secondly, the alliance will work on non-military issues like trade, energy, and environment and promote public goods.

Thirdly, it will provide India with a platform to go ahead with wide-ranging multilateral partnerships in the region. The big powers like France, Russia, and China are attracted to this region. Hence, it will help India shape its position on the geopolitical level.

Unlike the QUAD, the New Quad does not aim to counterbalance China’s rising dominance in the Pacific. Instead, Iran- a rival of Israel and the United States, brings these countries together to ally. Although Iran, a staunch ally of India, does not stand as a threat. Yet, its partnership with China, cannot be neglected completely. India and UAE also find it tough to engage with the Iranians and their constant territorial disputes. As a result, the alliance will assist India in fostering cooperation and strengthening economic connections with Israel (which is India's largest military gear exporter).

That does not imply that China does not remain a concern in the arrangement. The United States likely sees this as an opportunity to halt Israel and UAE in Chinese investment.

Although it is too early to predict its course, it has the potential to assist India in developing good connections with the Middle East. However, India must establish a common ground to avoid becoming entangled in a slew of West Asian crises that threaten to exacerbate existing regional tensions. To keep an eye on the Taliban in Afghanistan, India must maintain strong ties with Iran, even as it attempts to form a cooperation with the New Quad. Furthermore, when the dynamics of geopolitics alter, the long-term viability and content of this new cooperation will be put to the test.