The Power of Political Art 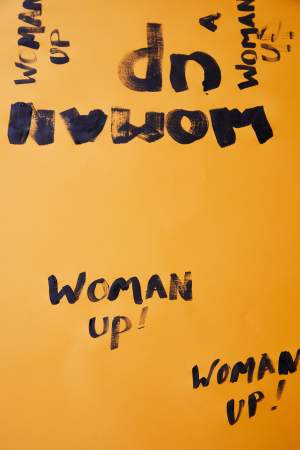 Above all, art is a means of conveying a message; it makes a statement and resonates. The value of art lies in the possibility of providing the viewers with a way to observe, engage and reconsider certain representations of reality. During difficult times, artists can use their art to question power structures and envision alternative facts. From Picasso's Guernica to Rosie the Riveter and Banksy's street art, aesthetics and advocacy have a long and complex history.

The use of art for political purposes combines the creative power of the arts to influence the observers and bring about social change emotionally. Among the many forms that this takes, activist art is one example. When the desire to express one's voice is combined with art, activism takes a different path allowing individuals to deliver messages and disrupt conventional understandings.

Art activism aims to create "art that is a form of political or social currency, actively addressing cultural power structures rather than representing them or simply describing them" (TATE). Through art and aesthetics, activism provides the opportunity to shift thinking patterns by transcending fixed political boundaries and moral values.

Art and social activism strategies have evolved in response to historical and technological shifts. The past years have been a fundamental momentum in the history of human rights ranging from the worldwide support of the Black Lives Matter movement to LGBTQ+ and indigenous rights and climate change protests, to name a few.

However, art activism has existed for generations. Among the many forms of visual representation, Guernica (1937) is considered the most potent anti-war painting in history by many art critics. Painted as a result of the outraged bombing and inhumanity of the war, Guernica resonates as a strong political statement through its monochrome palette of gray, black, and white.

The relationship between art and politics is also evident in the Guerrilla Girls movement in 1985. The Guerrilla Girls emerged as a response to the sexism and racism they were experiencing in the art world. Their activity was about combining arts with campaigns for social change and justice.

The series of posters created by the movement was used in campaigns targeting museums, critics, collectors, and anyone suspected of being actively responsible for the exclusion of women and non-white artists from mainstream art shows (Manchester in TATE). The movement advocated for inclusion in the art world through the provoking colors and imagery.

Guerrilla Girls, Do Women Have To Be Naked To Get Into the Met. Museum? (1989)

What inspires this discussion of the power of political art is one of the most significant activist movements against AIDS of the late 1980s - ACT UP. In the years of the AIDS epidemic, a great deal of stress and fear of the disease brought to the establishment of ideological misrepresentations of sexuality, inclusion of the different, and individuality. In this context, AIDS activism tried to challenge distorted understandings of the situation striving for better solidarity and political action.

The idea was to see and understand art through its performative nature, making it a form of expression suitable for political action. In the years of AIDS, activism became a channel for voicing concerns about the rising number of AIDS deaths and the lack of political and medical support.

The SILENCE = DEATH poster, created in 1987, is one of the most famous and influential ACT UP examples of the power of political art. "Targeted to advertise and organize against cultural, scientific, and political inaction and indifference, the Silence=Death poster uses abstract rather than photographic imagery to reach multiple audiences" (David Zwirner).

Posters have been used as activist tools since the 16th century, when Martin Luther's 95 theses were posted on the doors of the Wittenberg Castle Church as a response to the Catholic Church's corrupted practice of selling indulgences to absolve sins. As technology advanced, posters began to gain greater cultural significance as a source for effective message delivery. In the case of ACT UP, the poster design and its wheat-pasting around New York's most affected AIDS districts were used to raise awareness among the public and the establishment and organize civil demonstrations.

Inspired by contemporary revolutionary art, ACT UP created SILENCE=DEATH intending to attract the audience's attention through natural and sensible color and content material. As shown below, the poster is all about simplicity and direct impact. 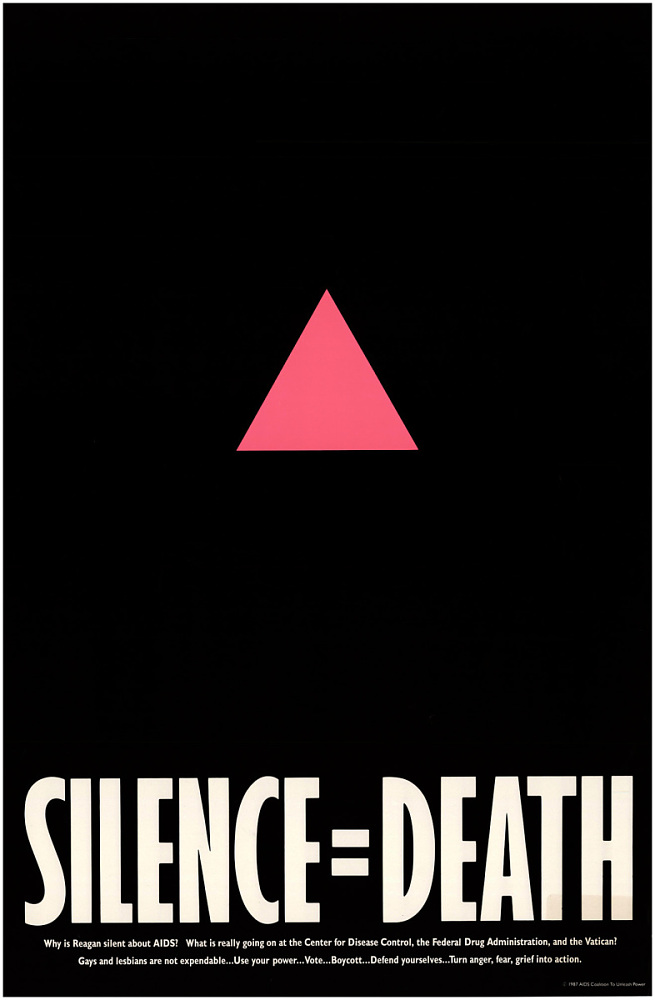 At the center of the poster, the pink triangle - referencing back to the symbol used by the Nazis to identify homosexuals during the holocaust - is used to compare people living with AIDS, both the disease and lack of governmental help, to the persecution of Jewish homosexuals. Demonstrating in this way a recurring historical pattern of marginalization and oppression. Under the triangle, the equation between silence and death also takes center stage. In white, capital, and bold font, the words reflect the idea that silence and stigma surrounding the epidemic and its victims are direct causes of the rising number of AIDS deaths and societal conflict.

The combination of colors, text features, and ideological messages affects the observers, contributing to their ways of seeing and truly understanding an artwork (e.g., posters). By stimulating an emotional connection and educating on societal issues, artistic strategies can contribute to visible shifts in power and action.

Art activism is a practice capable of challenging people's sensibilities about the world. Artworks can influence the creation and negotiation of meanings that help us make sense of our lives. Through the power of political art, activist movements operate at the crossroads of aesthetics' potential to portray human issues. By witnessing human life, art is a means of questioning the establishment and creating alternative ways of fostering solidarity, collective identity, and shared experiences.