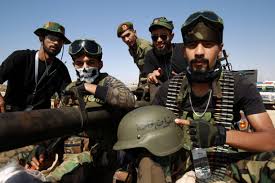 Over the last years, a considerable number of our youth has been sold by heterogeneous actors to fight as proxy actors in the ongoing conflicts in the MENA region. Russian and Syrian mercenaries are part of this trend.

The events that followed the outbreak of the Arab Spring have generated numerous power vacuums in the Middle East and North Africa, from Libya to Yemen. This situation has led to the strengthening of foreign fighters and mercenary networks used by regional powers and their international partners to defend their interests. With this strategy, countries like Russia and Turkey have bolstered their influence in the whole continent against the traditional colonial powers like France.

In December 2020, the United Nations Special Envoy to Libya, Stephanie Williams, revealed the presence of 20,000 foreign forces and mercenaries in Libya.

During the last two years thousands of Syrians, mostly young men under the age of thirty, were recruited by Ankara to fight in Libya with the promise of remuneration or other incentives.

Last week, Syria and Russia withdrew more than 1,000 mercenaries from Libya, 200 belonging to the Russian Wagner Group and 1,000 of Syrian origin. Anyway, about 5,000 mercenaries remain in the country. The decision is due to the growing costs of invading Ukraine.

In this new context of political resolution of the conflict, the exit of mercenaries from Libya puts before the international community several issues that must be addressed in the coming months. Firstly, the reintegration of mercenaries into the society of origin or newly acquired. Secondly, the restoration of the social contract is what binds them to the state or what remains of it.