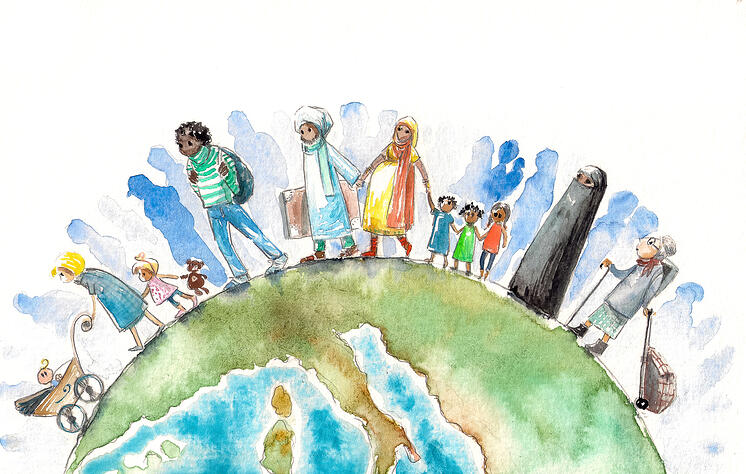 The word “immigrant”, though the meaning is fairly straightforward and neutral (“a person who comes to live permanently in a foreign country”), has become politicized to such an extent that it is almost a taboo word. Immigration is an extremely controversial subject and unfortunately, this word, once used, opens a conversation that causes discomfort and controversy. Pairing the word “immigrant” with “illegal”, which already has a negative denotation because of the gravity of its definition, dehumanizes and marginalizes the people that the term “illegal immigrant” seeks to describe. By contrast, “undocumented worker”, though it has been stated that the term is not wholly accurate in describing these individuals, sounds more technical and less emotional. Therefore, it has a significantly more positive (not even positive, to be honest, just neutral) connotation than “illegal”.

The general assumptions that were made about people who entered a country without the proper paperwork were that they must be the lowest of the low, that they are at the bottom of the social scale, and therefore simultaneously pathetic and dangerous. Usually, they are labeled “job stealers” (though how can they be if they’re too lazy to work?; the hypocrisy of the anti-immigration stance!) and “criminals” (the worst is assumed, which acts to spread distrust more than increase border security).

Interestingly, studies such as the one conducted by the Proceedings of the National Academy of Sciences of the United States of America (PNAS) reveals “undocumented immigrants have substantially lower crime rates than native-born citizens and legal immigrants across a range of felony offenses”.

With that in mind, it can be safely stated that the media has a hand in why immigrants are too often regarded with suspicion and caution. News outlets that do not support open, or an increase in, immigration generally portray the immigrants as being the source of an economic drain; more extremist sources consider immigrants to be undeserving criminals and frequently resort to racism in their narratives. Let us remember, off the top of our heads, Nigel Farage and his comments about how half a dozen starving refugees on a dingy amounted to a “shocking invasion on the Kent coast”.

The other side of the coin has its own issues: media outlets that do support immigration are considerably more sympathetic yet tend to romanticize very real, painful struggles. Though in general this does effectively evoke the empathy of their readers, it does transform the harsh realities of immigration into anecdotes. Yes, anecdotes that can be communicated more easily with others, but anecdotes that smooth out the edges that don’t fall in neatly with the overall picture of the archetypal immigrant. Either way, it creates characters out of real people.

Then, another factor of note is that although the concept of pro-immigration is supported by many socio-political groups and peoples, it is arguably quite rare to find an individual that offers support unwaveringly. It is complex. Definitions are not always agreed upon, and there are multiple layers to the issue: According to the Migration Observatory in Oxford, views are divided in Britain: “in 2019 around 39% thought that the level of immigration should stay about the same, while 44% said they would like immigration to be reduced.” It seems like the conversation is more about the degree of resistance rather than “acceptance vs. resistance".

Then it must be mentioned that people, at least the British people, make clear distinctions between immigrants vis a vis their country of origin and their purpose of travel. This implies certain attitudes regarding religion, language, culture, social class, that go far beyond just simply being “foreign” or “the other”.

In “Acceptable and unacceptable immigrants: How opposition to immigration in Britain is affected by migrants’ region of origin.”, Robert Ford called it an “ethnic hierarchy”: white, Anglophone, European, Christian are more welcome adjectives to the public than non-white, non-European, non-Christian.

However, it is obvious that there is definitely a softening of attitudes, as can be seen in the site, which can be attributed to the changing of the times as ethnically diverse communities become more and more the norm, and evolve.

Mega journal Scientific Reports’ study concludes that “negative portrayals of immigrants generate physiological and emotional hostility toward the outgroup, and ingroup favoritism in economic transactions, possibly determining efficiency losses in ethnically-diverse markets”, meaning that there is a close correlation between distrust of immigrants and lower levels of “prosociality in transactions with immigrants”. Prosociality is defined as behavior that benefits other people or society as a whole, and depends on shared goals and reciprocity, therefore entailing a level of trust and understanding that has apparently not been fully reached — though definitely within reach.

According to a piece by Jose Vargas in the Guardian, there are 11 million undocumented immigrants in the U.S. alone. The author denounces the common misconception that undocumented workers do not contribute to society, in fact, he provides evidence as to why they are “doing a whole lot of penance”. Labeling a person as an “illegal immigrant” dehumanizes and marginalizes the people that the term seeks to describe. It separates them and makes them second-class citizens; for example, “undocumented immigrants nationwide pay an estimated 8% of their incomes in state and local taxes on average. To put that in perspective, the top 1% of taxpayers pay an average nationwide effective tax rate of just 5.4%.” The worst thing that can occur, and it has occurred already, is that this derogatory terminology has become normalized, as Times writes, “people of all political persuasions do not think twice about doing it”.

Regardless of one’s own political stance, immigration has always been and still remains a controversial matter even within one person. Understanding is always the first step to being mindful and valuing the person over the label.