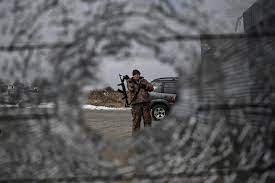 The city of Mariupol has been under siege for over two weeks. As Russian bombs continue to fall, water, food, medicine, electricity and means of communication with the outside world are scarce. Official Ukrainian sources speak of over 2,500 victims. Russian site Meduza spoke to Ukrainian journalist Artem Popov, who managed to escape Mariupol last week, about his experience in the besieged city.

My last day in the city was 8 March. The Russians had already started hammering with heavy artillery and tanks. It was tough - they fired most of the day, and even though the bullets didn't reach my position, the house didn't stop shaking. Yes, it was tough, but not like the rest of the city.

As long as I was there, after all, there was the possibility of calling someone, even if the city was already surrounded and blocked. I managed to escape through the area with the fewest Russian checkpoints. I still stay nearby because I don't want to lose contact with the city.

Getting out was really hard. Some of my friends had escaped to Zaporozhye a few days before me. They were let through, but then they told me that once they got to Rozovka, on the border between the Donetsk and Zaporozhye regions, they saw a lot of destroyed machinery and a lot of dead soldiers - even Ukrainians.

It didn't bode well. People who had left said that near the entrance to Mariupol, where there was a Russian military checkpoint, a still hot car could be seen from which smoke was coming out. Seated in front was a married couple who had been shot. From what I understand they had tried to get someone out of Mariupol.

It would not be correct to say that the bombing of Mariupol was a total chaos, but hospitals, schools and places of worship have come under fire. Fire stations are also being bombed - probably to prevent them from putting out fires. Russian forces recently carried out air strikes on fallout shelters; we are talking about shelters that contain from 400 to 1000 people each.

The number of victims has so far been around 1700, and this only by counting civilians. But no one has the time to record the exact data. Corpses are buried in mass graves, people dig graves and bury their neighbors where they can. The streets are full of the dead.

The next phase of the siege will see street fighting as Russian troops are gaining ground on the western outskirts of the city. As things are going, this is actually even an advantage, if you can put it that way: at least the aerial bombardments in the areas will stop, because otherwise the Russian forces would be hit.

On the humanitarian level, we are facing a complete catastrophe. We saw the first victim of the blockade imposed by the Russians five days ago, a 6-year-old girl killed by dehydration. The only support is snow: people begin to collect it and boil it as best they can. There is practically no more gas, or water, or lines of communication.

The only time people come out of shelters is when they light fires to cook. There are some collection points for water, but being able to reach them and then return alive to your refuge requires a lot of luck.

It was the 12th day of the blockade, for the sixth time an attempt was made to organize a humanitarian corridor. But in the morning, when the buses were supposed to arrive from Zaporozhye, the Russian military started bombing like crazy. From what I understand, they want people to leave only through checkpoints, so as to make it appear that the Russians themselves are liberating the civilians.

The Ukrainian side cannot guarantee our safety, so they don't advise people to leave. While the Russians do not let people go to Zaporozhye, where Ukraine wants to send civilians. Basically this is another kind of ultimatum from Russia.

The Russian side also did not provide any humanitarian assistance to Mariupol, it was limited to bombs. Perhaps they will do something in the occupied territories, for the benefit of propaganda. They are willing to destroy people just to have a 3 minute clip to show on RIA Novosti. Putin does not spare his people, let alone ours.

In recent days, attacks on civil infrastructure have increased: skyscrapers, hospitals, apartment buildings. They bombed a hospital where there were women in labor: 17 people were injured, including a young woman. We are talking about a giant hospital in the middle of the city. Of course, there were soldiers, also because at the moment they are in every neighborhood of the city. But there were no military bases, fortifications or outposts.

The people in the city are annihilated. Nobody leaves the fallout shelters - they are all afraid even if they would like to get out. If a large humanitarian corridor were organized, I think 90% of the population would certainly leave. But taking so many people out at once is unthinkable. There are people sitting in basements crying and saying they don't want to go to Russia.

If the Ukrainian side receives no support, the Russian forces will take control of the city. They will not stop bringing troops. Those who managed to leave said there are more Russian tanks around the city than trees.

It is not even that the Russian troops are attacking the people, that is not their goal. Putin wants to make a good impression on some of the population, so some civilians have been able to stop the tanks or make pro-Ukrainian protest marches. But I know that soldiers have also entered people's homes and shops to steal, and I don't dare to think what might happen if a person tried to stop them.

The fact is that they are destroying civil infrastructure, homes where children live, defenseless people; they might even carry out mass executions. Soon there will be no one left to kill.