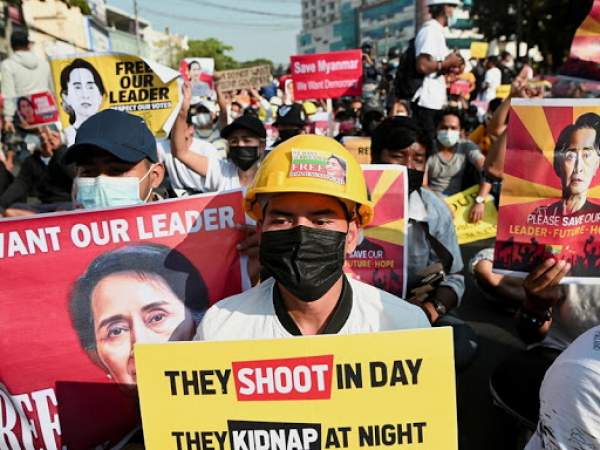 On February 1, 2021, the day which was supposed to be the first session of the new Parliament after their historical win in elections in November 2020 by getting 83% of approval votes from peoples. But the hours before the ceremony The Tatmadaw-Myanmar's military staged the coup in the parliament. They detained and deposed President Win Myint and State Counsellor Aung San Suu Kyi along with many ministers, their deputies, and other top leaders of the National League for Democracy (NLD).

The military-backed Union Solidarity and Development Party (USDP) did not accept the result of the elections and had also tried the country's Supreme court to argue that the results were fraud but all these claims were found baseless. And Myanmar's Union Election Commission dismissed their plea and reaffirmed the results.

In military-owned Myawaddy TV, where the news presenter cited the 2008 constitution, from which the military transfer the power to commander-in-chief Min Aung Hlaing and impose a state of emergency for a year. They also stated that after an emergency they will conduct a "free and fair election". According to the constitution written in 2008 which the Myanmar government follows completely states that the military had the power to wield both political and economic influences no matter who holds the administration. Under this constitution, the military had a quarter of reserved seats in Parliament and has jurisdiction over ministries like home affairs and defense. They also had veto power on any amendment to change the Constitution. Through this, the military seized power from the government and imposed military rule on it. They took the control over country's infrastructure, banned television broadcast nationwide, and also canceled flights both domestically and internationally. Telephone and internet services were suspended. All types of commercial banks and the stock market had been closed.

Armed forces ruled the country from 1962 however in 2011 the rule is returned to a quasi-democratic government but it again changes to a dictatorship-led country. This time the military masked their implementation by saying it's all for the goods and welfare of Myanmar's peoples and they are saving them from the fraudulent government which they come under the trap. But people of Myanmar not buying the words of the military and started their peaceful protests against them. This protest is known to be the largest ever since the Saffron Revolution in 2007. Protesters include teachers, lawyers, government officials, bank officers, students, and thousands of monks who rise against the military regime. Growing protests against them, the military try to suppress the movement by water cannons, rubber bullets and even live ammunition on them. They also restricted gatherings of people in a place and imposed a curfew on them. The military is known to disperse these movements by using these methods in the past also like shooting protestors in 1988 and 2007. This time they become more violent against protestors. On the incident of March 27, they killed more than 550 people and assaulted or detained thousands of others. The incident called it to be the bloodiest day since the start of the coup.

Why did the military stage the coup? After transitioning to civilian rule in 2011, there is been a growing popularity of Ms. Aung San Suu Kyi both internationally and domestically. The military tried to destroy the democratic party's reputation through cases of minority ethnic groups like Rohingya Muslims in 2019. But all the attempts ended in futility as results of elections in November 2020 gave them a humiliating defeat. They couldn't accept the results of elections and made claims like irregularities while conducting an election without any evidence to support the claim. So, they stage the coup to have back full power over the country.

All over the world are condemning the actions the military had took to "take control" of the country. World leaders demanded the coup to release Ms. Aung San Suu Kyi and other detained officials free from custody and respect people's wishes and votes of the November 2020 elections. The Obama-led U.S helped the transition to civilian rule is deeply deploring the motives of the army and newly elected President Joe Biden had said "immediately relinquish the power they have seized, release the activists and officials they have detained, lift all telecommunications restrictions, and refrain from violence against civilians" and threatened to review sanctions on Myanmar.

In a tweet, UK prime minister Boris Johson said, "I condemn the coup and unlawful imprisonment of civilians, including Aung San Suu Kyi, in Myanmar. The vote of the people must be respected and civilian leaders released."

India is showing "Deep concerns" over the matter. Many other countries including Japan, Canada, New Zealand, Australia, etc., criticizes the actions of the military and demanded the release of detainees.

In the incident of March 27, the United Nations human rights office, spokeswoman Ravina Shamdasani released a statement "We strongly condemn the escalating violence against protests in Myanmar and call on the military to immediately halt the use of force against peaceful protesters". The international community denounced Myanmar's leadership for increasing attacks on protestors and fired on unarmed demonstrators. But China stand is still unclear on this matter as Wang Wenbin, Chinese foreign ministry spokesperson issued the statement "learning more about the situation" and that China is "a friendly neighbor of Myanmar, and we hope that all parties in Myanmar will properly handle their differences under the constitutional and legal framework and maintain political and social stability." And if China supported this leadership and makes huge investments in Myanmar then those sanctions by the U.S will be a failed attempt to resolve the issue.