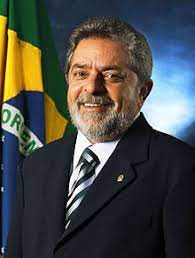 After 11 years, Lula returns to run for the Presidency of the Republic. All the polls crown him as the great winner of the election competition. This has prompted the leader of the Workers' Party (PT) to anticipate the announcement of the candidacy, which took place in early February.

Over the past few months, Lula met with Geraldo Alckmin, former president of the PSDB (center-right party), which has led many newspapers to speculate that the latter might be the vice-president of the next PT-led government.

There will be two levers that Lula could use during the election campaign: that is to be persecuted (because of the 22 investigations opened against him) and unjustly condemned by the magistrates of Curitiba. (including Sergio Moro, who was his competitor for the Presidency before retiring in recent days) and that Brazil experienced a significant period of economic expansion during his government.

Another strong point is the Bolsa Familia program, created by Lula's first executive to support the poorest families and increased in 2021 by Bolsonaro to 400 reais per month to cope with the pandemic. In addition to the economic proposals in the past (and present), judicial Lula holds sway in public opinion.

Over the past six years, Lula has focused on numerous corruption scandals. In 2017, he was convicted of having a triplex apartment bought and renovated in Guarujà, a town on the Paulista coast, by the OAS, part of the Petrobras cartel.

An episode that brought the leader of the PT to prison with an arrest warrant issued by Judge Sergio Moro. With the Lava Jato investigation, twenty-two more investigations were opened against the former head of state. Odebrecht, leader of the companies of the Petrobras cartel, would have paid for the conferences held by Lula in Angola, obtaining as counterpart rain funding from the Banco Nacional de Desenvolvimento (BNDES) to build infrastructure in that country.

The former president was also accused of having received 4 million reais from the same Odebrecht from December 2013 to March 2014, an electoral contribution that, according to the magistrates, would constitute a bribe received by Lula.

In another case, however, the two-time head of state would have put pressure on the government of Dilma Rousseff to buy 36 fighters from the Swedish company Saab in exchange for bribes. This is currently the only process, as all other cases have been closed due to lack of evidence or prescription.

In June 2021, the Supreme Court ruled that former magistrate Sergio Moro was not impartial in assessing the trials underway against Lula, which instilled new doubts about the integrity of the charges against the former president.

For many Brazilians, the election of Lula would be a moment to savor after the poorly handled Presidency of the populist president Bolsonaro. For the opponents, on the other hand, he remains "the biggest corruptor in Brazilian history."