The Western Standard: How the Ukrainian Refugee Crisis is differently perceived by the media 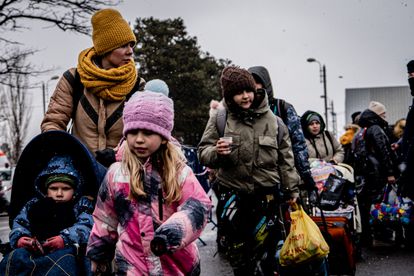 The Ukrainian-Russian conflict, consolidated by the Russian invasion of the Ukrainian territory on February 24th, created a new refugee crisis in Europe expected to be worse than the one seen in 2010 amidst the Syrian Civil War due to geopolitical reasons. According to the United Nations Refugee Agency (UNHCR), to this date, 3,063,095 Ukraine nationals have already fled their country, seeking refuge in neighboring states such as Poland, Romania, Moldova, and Belarus. Meanwhile, the International Community has created a widespread web of solidarity towards Ukraine and its citizens. Besides denying Russia’s participation in international competitions such as the 2022 Paralympics and Eurovision, boycotting Russian products, and public figures, like Ian Dunt, coming forward requesting financial support for the Ukrainian army, we have also been able to observe how European leaders and Western media have been dealing with the Ukrainian refugee crisis and how it has a blatant discrepancy regarding how other refugee crises have been perceived.

On March 15th, Emmanuel Macron made a solidarity speech to welcome 15,000 Ukrainian refugees into French territory, receiving the title of “the protective President” by the national media (Le Monde, 2022). On August 20th, 2021, the French President went forward on a broadcast speech regarding the Taliban takeover in Afghanistan, where he emphasized that France should anticipate and protect itself against the increasing irregular immigration flux that would come with the conflict (Le Télégramme, 2021). Furthermore, Philippe Corbe, a well-known French news reporter, said on BFM TV: “We’re not talking here about Syrians fleeing the bombing of the Syrian regime [...] we’re talking about Europeans leaving in cars that look like ours to save their lives.”. The abysmal difference in treatment of white European refugees and non-white Arabic and African refugees is not only a French reality but rather spread across other countries. Daniel Hannah, from The Telegraph, said “They seem so like us. That is what makes it so shocking. War is no longer something visited upon impoverished and remote populations” (The Telegraph, 2022). The Bulgarian Prime Minister said on TV: “These are not the refugees we are used to. [...] this is not the usual refugee wave of people with unknown pasts. No European country is afraid of them.”. This last quotation perfectly summarizes the Western Standard.

The Western Standard is a term designated to point out the International Community’s double standards regarding conflict according to its geographical location and political importance. Conflict is a fact in world politics; however, tragedies always seem to be more astounding when staged in predominantly white and fairly rich countries. A study by the National American Election Study, a group of social scientists from the United States, confirmed that race is a major factor when it comes to public approval of conflicts. According to said study, conflicts in non-white areas are more likely to be seen as justifiable (New Hampshire Bulletin, 2021). The war in Yemen (since 2014) is considered to be the world’s worst civilian crisis (Aljazeera, 2022). Yet; its refugees have received less support and less mediatic praise for their courage than those who fled Ukraine. It is often forgotten that no refugee is a refugee by choice but by need. All refugees are the same before the Geneva Convention, regardless of their social background. Yet, as shown, this equality factor is being constantly forgotten by the media coverage of the refugee crisis, confirming the underlying impression that “Europe takes care of their own while others can, quite literally, drown.”

COVID-19 Aggravating the Largest Humanitarian Crisis of Our Time, the Syrian Refugee Crisis