The Zenith of Apathy: The Baloch Genocide in Pakistan 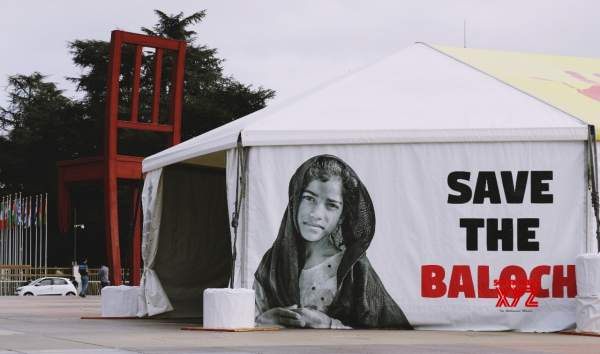 In the recent past, ethnic groups in many countries have witnessed Human Rights violations, sectarian violence and ruthless genocide. Quite recently, Israel renewed its conflict with Gaza, a conflict that has been ongoing for over 14 years, and is yet to see an end. The Syrian refugee crisis has been the poster-image of displacement, rootlessness and statelessness for over a decade. Closer home, since 2016, Myanmar has been involved in the persecution of the Rohingya community. In all these events, countless lives have been lost, with many others being pushed dangerously to the edge. Yet another such instance of human rights violation is that of  the Baloch genocide in Pakistan.

Balochistan is located in the western part of Pakistan, making it one of the four provinces of the country. It is also the largest in terms of geographical area, while being rather less populated in comparison with the other provinces. Balochistan was not always a part of Pakistan- it was annexed in 1948. Since then, Pakistan has tried to influence the Balochs with their culture, tradition and way of living, an act that has caused great discomfort to the indigenous people of Balochistan. However, this is not the least of their troubles. Since decades, Balochistan has been the hot-bed of religious extremism, with groups like Lashkar-i-Jhangvi and the Pakistani Taliban's targeted and strategic attacks at the ethnic minority groups, majorly composed of the Hindus, the Shia Muslims, and the Zikris.  Since 2005, many Hindus and Punjabis of the Baloch region have gone missing, or have fled to other parts of Pakistan, fearing for their lives. Amongst the Shia community, the Hazaras have been especially targeted, with the latest attack on the group coming earlier this year in January.

According to a BBC News Report dated January 3, nearly 11 miners, most of them belonging to the Hazara community of the Shia Muslims, were kidnapped from their workplace, at the small town of Mach. The report also stated that "the Islamic State (IS) group claimed responsibility for the attack". This attack is not the first. On the contrary, it is one of the successors in a long line of such attacks on the Hazaras of Balochistan, with attacks dating across several years. In his article for Zee News on January 5, 2021, Manish Shukla quotes the UK Home Office figures that estimate nearly 2000 Hazara casualties in the region, owing to sectarian violence and terrorist attacks. The predominantly Sunni outfits of Lashkar-i-Jhangvi and the Taliban have, in the past, and continue to be, engaged in promoting an atmosphere of hatred against the Hazaras, by "holding anti-Shia rallies, distributing anti-Hazara pamphlets and engraving anti-Hazara graffities on the walls". In 2003, nearly 53 people lost their lives in a suicide attack on the Main Shia Friday Mosque. Subsequently, in 2004, there was an attack on the Shia Muslims at the Liaquat Bazaar, followed by a car-bombing incident in October that year. Between 2006 and 2009, nearly 340 Shia Muslims were killed in violent attacks.

To make matters worse, the Hazaras are also the frequent targets of the Balochistan separatists, a group of people who believe in Baloch nationalism and have been pushing for an independent state, based on the foundations of ethnic pride and loyalty.

A factor that works against the Balochs is their gene diversity (studies have been carried out), which endows them with a distinct physical appearance, leading to their easy identification. The Hazaras have also faced discrimination from the government, with their basic needs not being met. The regions they occupy are extremely hostile, yet another factor that contributes further to the deterioration of their living conditions. Overall, it is believed that nearly 5,000 Balochs have gone missing till date, most of whom were activists who raised their voices against the systemic 'cleansing' of the Hazaras. For instance, in August 2020, Shaheena Shaheen, a Baloch journalist and activist, was killed after receiving death threats for several months. Most activists happen to be male, and their disappearance or death creates a void in their families. Deprived of their breadwinners, the women of many Hazara communities are forced to venture outside for work, putting them in a socially and economically vulnerable position. Due to this, many Hazara women have been kidnapped, raped and even converted by the terrorist groups, furthering the beyond sorry plight of the Hazara community in Balochistan.

Many members of the Hazara community have fled Balochistan to other regions of Pakistan, and even to other countries. If this exodus begins to happen on a large scale, then, the genocide might create a refugee crisis as well.

In 2020, the BHRC (Baloch Human Rights Council) called out the UN for their demonstrated "apathy" towards the genocide in Balochistan. The highlight of their campaign, according to a The Statesman report, is the pavilion they have set up outside the UN headquarters in Geneva, underlining the issue. In September 2020, Naela Quadri Baloch, the Chairperson of Baloch People's Congress stated that "Balochistan is bleeding". It's a pity that Balochistan, despite being a geographically resourceful and spacious landscape, is actually the poorest region of Pakistan, with little to no development happening in the region.

Any Human Rights violation exposes our inability to embrace differences, and to practice tolerance. It displays our mindset of believing that one community is superior over the others. It is the mindset that gave rise to racism, sexism, casteism and religious fanaticism. It is the concept of 'singular existence', where there is absolutely no space for the others. In a world that is already ravaged by the pandemic, we do not need more violence, and we do not need more deaths. The pandemic taught us the need to unite through the forces of compassion. In her essay titled Terrorism, globalization, bio/diversity, survival: A Feminist Perspective, Susan Hawthorne advocates that "(we) need to move towards a principle based on biodiversity, a philosophy based in the local, in contextual richness which includes the principle of diversity- social, political and cultural diversity". Now more than ever, we need these words to remind us of the direction we need to take, and the paths we need to find.