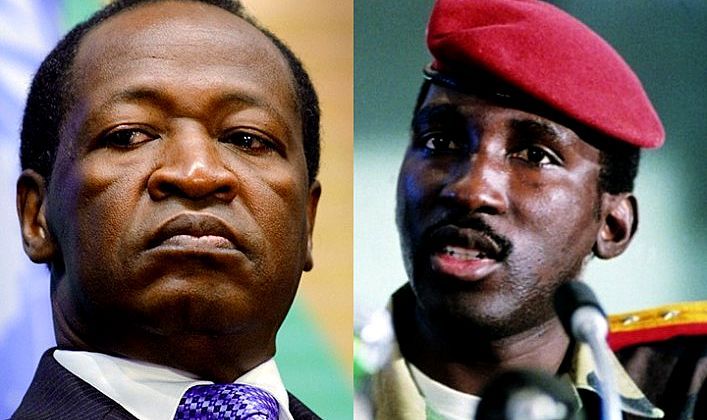 Blaise Compaore, the former president of Burkina Faso was sentenced to life behind bars for the murder of Thomas Sankara, the country’s most memorable revolutionary leader.

A trial of 14 accused, including Compaore in the case of assassinating the pan-African leader Sankara, came to a verdict on Wednesday, April 6th. Burkinabe prosecutors first asked for a thirty-year sentence for the former president but an Ouagadougou court alternatively settled on a life sentence for Compaore and the other two accused.

Sankara held the presidential office of Burkina Faso from 1983 to 1987. A Burkinabe native-born in 1949, he left the country and began his military career in Madagascar at the age of 19. Sankara returned to Burkina, then known as Upper Volta during 1972, to fight a border war against Mali.

Sankara met Compaore in 1976 in Morocco and became comrades. They orchestrated the August 4th, 1983 “coup d’état” to overthrow the militant government of Jean-Baptiste Ouedraogo. Sankara accused the Ouedraogo leadership of serving in the best interest of neo-colonialism and foreign interests. Later, Blaise Compaore became senior adviser during the presidency of Sankara.

On October 15th, 1987, Thomas Sankara was assassinated during a raid led by his decade-long friend Blaise Compaore. In addition, twelve other acolytes got murdered. The reason for his assassination is said to be internal disagreement in regards to the progression of the nation.

The coup couldn’t get endorsed by the public, and Compaore did not receive the same popular support as his predecessor. He disintegrated Sankara’s Revolutionary Council and appointed himself as president. In 2014, Compaore eventually stepped down and went into exile to neighboring Cote D’Ivoire after a popular uprising in defiance of his desire to remain in office.

The state of Burkina Faso improved significantly with the decreased number in infant mortality, gender equality in government posts, and growth in literacy rates. By the end of Sankara’s first year in the presidential office, around 10 million trees got planted to battle desertification. He changed the imperial name from Upper Volta (Volta River) to Burkina Faso, which means “land of honest men” in two of the most widely spoken languages in the nation, Mossi and Dioula.

Sankara’s presidential career was a product of anti-imperialism, pan-Africanism, feminism, and environmentalism. He gave one of his most supreme presidential speeches in Addis-Ababa in July 1987 at an African Union summit, previously known as the Organization for African Unity, in defiance of foreign debt.

“It is the colonizers who indebted Africa to the lenders, their brothers and cousins. We are oblivious to this debt. Therefore, we cannot pay it.” (EFE News, Madrid)

Thomas Sankara remains an inspirational leader in the memories of many young Africans. His integrity and contribution to the decolonization of Burkina Faso became a fundamental principle for pan-Africanists today.