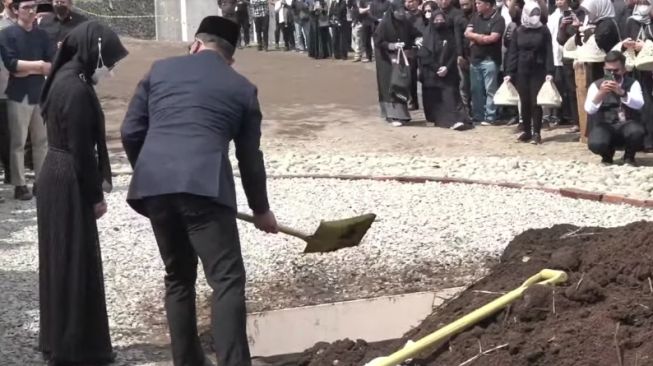 The eldest son of the governor of West Java, Indonesia, Ridwan Kamil, who died in the Aare River, Bern, Switzerland, arrived in Indonesia on Monday, June 13, 2022, this morning. Had disappeared in the Aarae river on May 26 and was only found on June 8, 2022. Eril's body was buried in Cimaung Village, Bandung Regency, West Java. The funeral procession is limited to only family and closest relatives attending. Before burial, the body is at home first, family and relatives come to pray and pay their last respects.

Thousands of residents and even students who were still wearing school uniforms stood on the side of the road to the burial site waiting for the car that brought Eril's body to the cemetery. Thousands of residents stood on the side of the road to welcome and pay their last respects to the eldest son of the governor, Ridwan Kamil. Some of the students brought banners and flowers for the deceased. The enthusiasm of the residents around the burial site made the streets crowded smoothly. The burial location is in a special family cemetery that has been prepared.

Eril's departure brought sorrow not only to the family and friends who were left behind but to all residents of West Java and Indonesia. Millions of people continue to pray and express their condolences on social media. It is known from governor Ridwan Kamil's post on his Instagram @ ridwankamil who posted a video with the caption of the last greeting and a prayer for the late Eril which was liked by 1 million more likes. It can also be seen in the video that thousands of residents stood up to welcome the entourage carrying Eril's body.