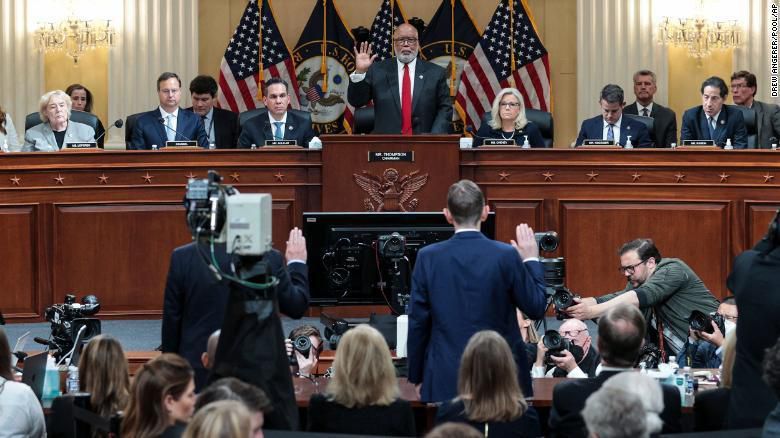 On January 6, 2021, the United States of America encountered the attack on the Capitol Building by the supporters of former president Donald Trump. Supporters were enraged by the results of the 2020 presidential elections, in which Trump’s opponent Mr Joe Biden won the elections from a democratic party.  Rioters wished to overturn his defeat by disrupting the Joint Session of Congress assembled to count electoral votes that would formalize the victory of President-elect Joe Biden. It is reported that Mr Trump incited his followers to demobilize the Capitol on the morning of 6 Jan in his previous speeches.

This Capitol insurrection is investigated by the House select committee, which on Thursday detailed how former President Donald Trump created pressure on the then vice-president Mike Pence to overturn the 2020 presidential elections by going against the US laws. Mr Pence refused to follow his plan and went against the president’s will, saving American Democracy.

On Thursday, two witnesses who were advising members of Pence’s team testified: Greg Jacob, Pence's former counsel, and J. Michael Luttig, a highly respected conservative jurist and retired federal judge who advised Pence in the aftermath of the 2020 election.

The committee observed how conservative Trump attorney John Eastman made and suggested a legal theory to overturn the results of the presidential elections by Pence, using his vice-presidential powers to unilaterally block the certification of the elections. This theory was accepted by President Trump, even though it was rejected by Trump's White House attorneys and Pence's team.

Trump continued knowing the fact that this theory was Illegal

It was revealed on Thursday that President Trump was clear about the fact that this theory proposed by Eastman was illegal, but he continued to persist with his plan.

According to witness testimony, the lawyer who proposed the plan and Pence himself told Trump that the plan to overturn the election results was unlawful. Committee members accused Trump of his intentions by violating federal law and going against the constitution.

It is found in a videotaped deposition that Pence's chief of staff Marc Short said Pence advised Trump "many times" that he didn't have the legal or constitutional authority to overturn the results.

Mike Pence and Violence on 6 Jan

According to the statements of rioters, they were enraged by the speeches given by Donald Trump in his rallies. Trump claimed to his supporters that the election was rigged against him. He made his supporters believe that Pence had the power to justify the results and save democracy. Trump openly criticized Pence in his tweets while the was under attack. He said that Pence "didn't dare to do what should have been done."

The committee emphasized that Pence was in real danger on the day of the Capitol attack, as the crowd was just 40 feet away from him shouting his name in anger for not overturning elections as said by President Trump. Counsel blamed Trump for this adversity.

Committee member Rep. Pete Aguilar, a California Democrat, said that "Vice President Pence was a focus of the violent attack".

Eastman, the conservative attorney of Trump, was highly determined to overturn this election. He made every effort to pressurize Pence despite being criticized by White House lawyers and Pence's team. Eastman was pursuing efforts to block the election result, even after the riot at the Capitol, the committee revealed.

Even though the committee was set up to discuss the past events of 2020, it went to great lengths to unveil the potential threats to American democracy by Trump and his supporters.

Jacob said Trump's plan was "antithetical to everything in our democracy" and would've thrown the nation into an unprecedented constitutional crisis."

The committee says to put forward legislative proposals to close the loopholes that Trump and Eastman tried to exploit. They committed to safeguarding the transition of power. However, there is bipartisan interest in passing some of these proposals.

A Death that Provoked a Nationwide Search for Justice