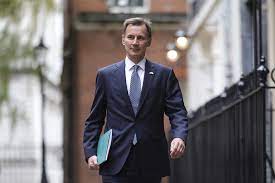 It’s fair to say that UK politics has been in flux for the past six months. From Boris Johnson’s demise after being found to have broken Covid-19 lockdown restrictions, to Liz Truss’ short but economically concerning time in Number 10, both the country and the Conservative Party appear to have found a degree of relative stability under Rishi Sunak.

On November 17, UK Chancellor Jeremy Hunt announced his plan to get the country’s economy back on track. The “mini-budget” of his predecessor Kwasi Kwarteng and Prime Minister Liz Truss had terrified the markets and saw the value of the pound sterling plummet against the US Dollar.

Taking her lead from Thatcherite politics, Truss proceeded with an ideologically driven economic platform that focussed on cutting taxes as a way of trying to promote growth. Amongst the measures introduced was a promise to speed up a planned cut in income tax from 20% to 19%, a reversal of the rise in National Insurance, and the abolition of the Health and Social Care Levy which was supposed to come into force in 2023.

Most controversial of all, however, was the removal of the 45% tax rate for the highest earners in society, a decision which saw the IMF voice their concerns about a budget that would “likely increase inequality” and was eventually reversed. In the context of a rise in global inflation, as well as a national cost of living crisis which has seen 93% of UK households citing a noticeable rise in their cost of living since August 2022, this bumper plan of tax cuts and economic change was ill-thought out and has been seen as more of a desire to drag the Conservatives back to the right of politics rather than one which would stabilize the market and slow the rise of inflation and interest rates.

Rishi Sunak’s premiership has therefore become one which will be defined by whether he can show enough conviction and economic knowhow to stabilize the markets; he was open in his criticism of Truss’ economic plans during the Conservative Leadership Race in September 2022, predicting that her £30 billion tax cuts would tip millions of citizens into “economic misery”.

The Autumn Statement was much more conservative than Kwarteng’s mini-budget, although it still ultimately hit the pockets of low- and middle-income families. Many of the headline policies do, in isolation, appear to be aimed at lower-income jobs and the most vulnerable in society.

The minimum wage is set to increase from £9.50 to £10.42 per hour for over-23s from April 2023, whilst means-tested benefits and state pensions will rise at an eye-watering 10.1%, moving in line with inflation. Increased funding for the NHS and schools was also key to the government’s announcement on Thursday, compensating for the immense pressure both sectors faced during the height of the Covid-19 pandemic.

Alongside a freeze in tax rates, meaning anyone earning under £12,570 per annum will not have to pay income tax, this does seem to superficially support those who are most likely to struggle in a cost-of-living crisis. Additionally, there will be a continuation of support concerning energy bills, which has been one of the main issues globally due to gas and fuel shortages that have seen prices soar. The amount of help given will reduce in size, with bills being capped at £3,000 rather than £2,500, but is nonetheless welcome from those currently choosing between eating or heating.

The most surprising aspect of the Autumn Statement, from an ideological standpoint at least, is the introduction of a 35% windfall tax on energy companies that have made billions in profit over the last year; Shell and BP both reported record profits, with the former making $9.5 billion in profit over just 3 months. The Labour Party has been calling for action of this sort for many months now, emphasizing the government’s newfound pragmatic approach, replacing the more dogmatic agenda of so-called ‘Trussonomics’.

As always with economic plans and budgetary changes, however, the devil is very much in the detail. Where a lot of the above appears to be fairly uncontroversial, there are still questions to be answered by Hunt and the Treasury.

Whilst there is more emphasis on taxing big business than in Kwarteng’s emergency budget, the majority of government income will come from taxing the income of lower- and middle-income households. The freeze of tax bands means that more people will, with the rise of the minimum wage and the cyclical nature of pay rises in much of the private sector, drag more people into higher thresholds at a time when incomes are already being squeezed.

A piece by Byline Times reveals that, in the small print of documents that accompanied the Statement, taxation on bank profits has been cut, with the government reducing the said tax from 8% to 3%, seeming to go against the Chancellor’s promise that the nation’s current economic difficulties would be “compassionately” shared across all socio-economic groups.

Bloomberg suggests that this decision was taken to shield banks from the planned increase in corporation tax, but where banks will likely save billions, many in society will be paying more to prop up such a protective policy.

The Autumn Statement was, unsurprisingly, the main focus of Thursday, November 17’s edition of BBC’s Question Time, with politicians and journalists picking apart what the new fiscal plan meant for the country. Whilst The Spectator’s Kate Andrews protected the government from Brexit-related criticisms, she did raise the point that means-testing could have gone further, especially concerning pensions.

That state pensions were protected in this Statement is music to the ears of both the Conservative Party, for whom the triple-lock on pensions was a manifesto pledge and the millions of people who rely upon such aid daily. The Statement did not make any stipulations to the 10.1% increase in pension funds, however, meaning that millionaires or those with an already large pension pot will also receive an inflated pension. Again, this is not compatible with the idea that the burden of economic recession will be spread fairly across society.

High taxes come alongside a promised cut in public spending, although the details of such cuts are yet to be made clear. Any proposed reductions will not come into force until 2025, by which time the UK will have had a General Election, meaning the current government may not have to deal with the issue at all; whilst government popularity has improved since the catastrophic tenure of Liz Truss, the government still faces a 70% disapproval rating according to a recent YouGov poll.

We will have to wait and see if these measures will be enough to stifle inflation and ultimately inspire economic growth, but with even the Chancellor himself admitting that there are “very difficult decisions” ahead, it is likely to get worse before it gets better.