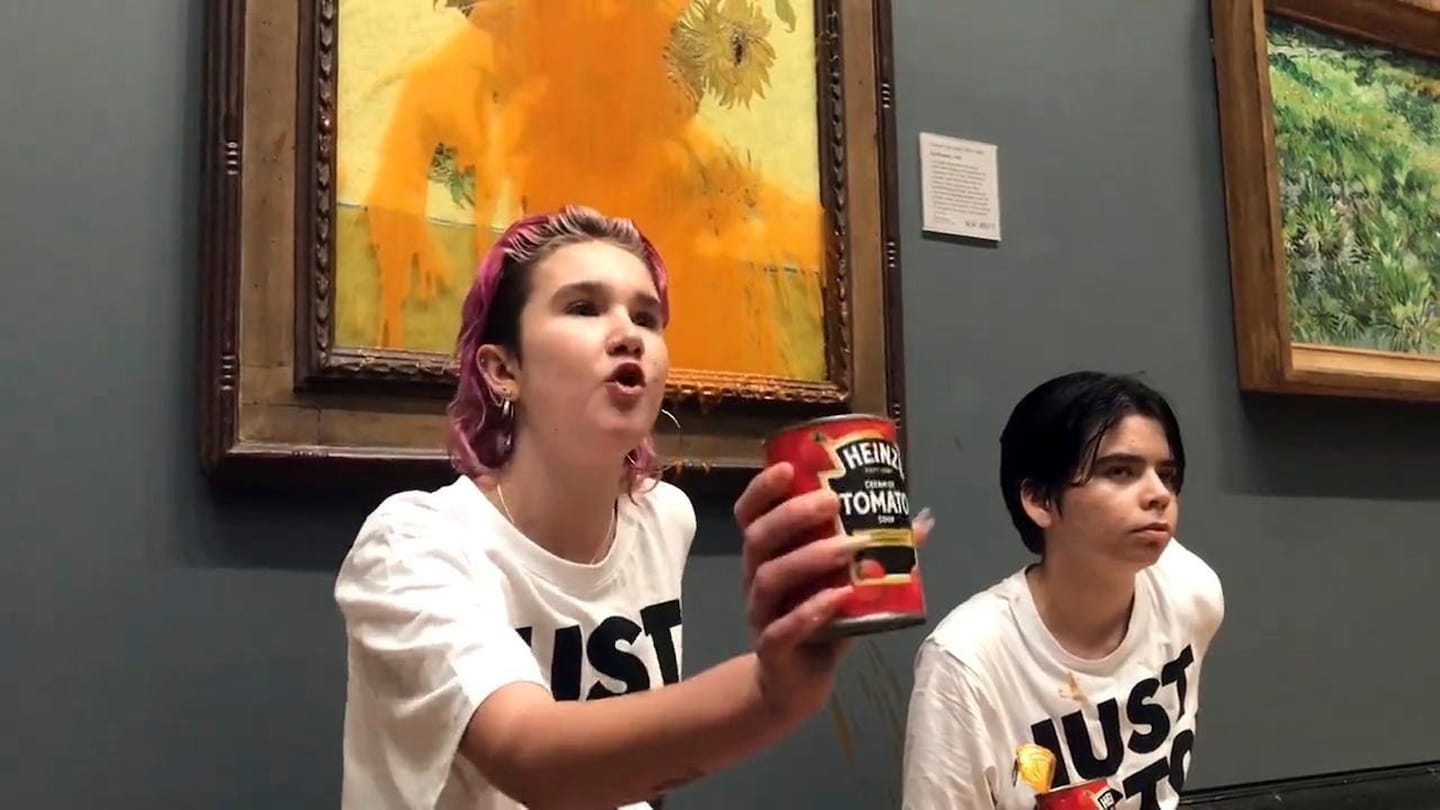 On Friday, anti-fossil fuel activists spilled soup over a glass-covered artwork of Vincent van Gogh's "Sunflowers" at London's National Gallery. However, the artwork was unharmed.

According to the organization Just Stop Oil, activists allegedly put two cans of tomato soup over the art piece, regarded as one of the Dutch painter's most recognizable pieces, which urges the British government to block new petroleum and gas projects. Additionally, the two protestors used adhesive to cling to the gallery wall.

Soup splatters coated the gilded frame of the picture and the glass that topped it. According to the gallery, the image is undamaged, although there is some slight frame damage. On Friday afternoon, it was restored and placed back in the exhibit.

Van Gogh created multiple renditions of "Sunflowers" in the late 1880s, and this piece is one of them.

According to the Metropolitan Police in London, two participants were detained on charges of aggravated trespass and disorderly conduct.

Later, the same demonstrators reassembled at police headquarters and painted the spinning "New Scotland Yard" sign in front of it. A few of them also clung to the pavement, obstructing traffic. Twenty-four persons, according to the police, were arrested.

The "Just Stop Oil" organization has drawn criticism and attention for attacking works of art worthy of a museum. For example, at the Royal Academy of Arts in London and the National Gallery, activists for the Just Stop Oil movement applied glue to the frames of early copies of Leonardo da Vinci's "The Last Supper" and "The Hay Wain," respectively.

During the two weeks of protests, activists have also obstructed bridges and crossings around London. The demonstrators were members of University of Maryland sociologist Dana Fisher called "the disruptors."

Michael Mann, an environmental scientist at the University of Pennsylvania, expressed concern that the graffiti "disenfranchises many people we need to attract into the

mainstream." People who are natural partners in the fight against climate change but who will associate such behaviors with climate advocacy and activism negatively.

The British government has started a new licensing cycle, despite objections from activists and academics who argue the measure undermines the country's promise to tackle climate change.

It is evident that the worth of paintings such as those by Van Gogh changes with time and is influenced by various factors. For example, at Christie's in London, Sunflowers, one of the seven still-life paintings of the flower he created, sold for £24 million in 1987.

Even though the price of the iconic 1888 artwork, which was vandalized on Friday, has been assessed to be £72.5 million ($81,552 million), experts predict that if it were to go back up for sale again, it would probably bring in several hundred million dollars.