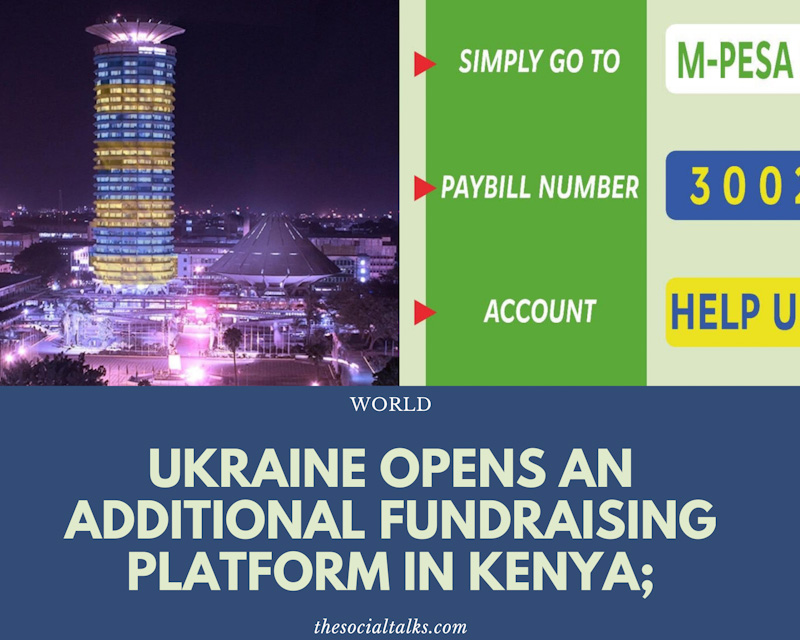 The Ukrainian Embassy has opened a fundraising channel in Nairobi. This channel is operational through the popular mobile network service of M-PESA in a bid to rally more Kenyans to contribute to their fight against the Russian invasion. M-PESA is owned by Kenya’s largest mobile network Safaricom PLC. According to the company, it has nearly 50 million users. The embassy had previously established a platform, mainly through the local banking services of the Absa Bank, where they shared a specific account details as well as the currencies that would be accepted.

Kenya, a non-permanent member of the United Nations Security Council (UNSC) voted in favour together with 140 countries in condemnation of the Russian invasion in Ukraine. Kenya has consistently aired its position in the war, mainly calling for a peaceful means of settling the disputes, the recognition of the sovereignty of Ukraine and condemned the violation of the Ukrainian people’s human rights. This, together with the calls by Kenyans who intended to support the war, resulted to the Embassy opening up the additional donation platform that can be accessed by the general public.

While this news received various reactions from social media users, the country has received support from several non-governmental organizations, local community groups, and the Government of Kenya as it continues to defend its territory from the Russian Army. Both countries have had long-standing diplomatic ties as their prime focus is on working on trade and educational problems.

The Ambassador of Ukraine in Kenya Pravednyk-Andrii has called on other neighbouring countries like Uganda to support their fight against the Russian invasion. According to Reuters, the war has led to the deaths of nearly 24,000 people and displaced about 10 million people. This report comes as the international community calls for an investigation of possible war crimes involving mass murders that the Russian Army has committed in Ukraine. The most recent development is one is the massacre in the City of Bucha that has resulted in the deaths of nearly 300 people.