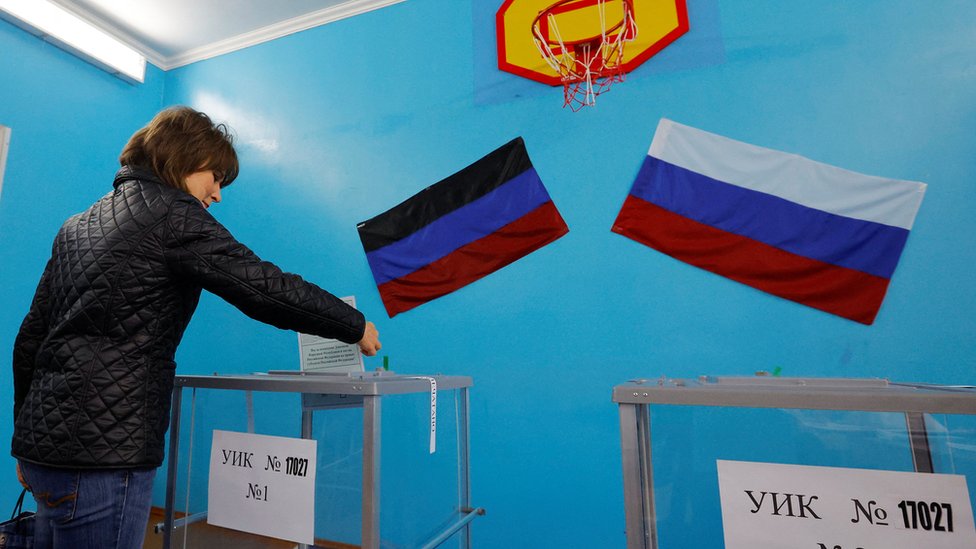 Russia publicized the launch of a referendum on Friday, September 23 in the four provinces of Ukraine, Zaporizhzhia, Luhansk, Donetsk, and Kherson, where Russia had gained ground since its invasion of Ukraine in the first half of this year. The Russian media stated that the plebiscite is planned to last for the next four days and that the election officials would knock on doors carrying portable voting boxes.

Ukrainian officials told Reuters that armed militias were breaking into homes, individuals were forbidden from leaving some controlled locations until the four-day polling was over, and employees were threatened with a pink slip if they refused to participate. Russian local television featured election officials visiting residential areas, one of the teams being escorted by a masked police officer bearing an assault rifle.

A freelance journalist who was on a visit to Russian-occupied southern Ukraine reported to The New York Times that on Friday morning, while she was driving through the neighborhoods, she noticed Russian authorities waiting at a neighbor's yard for her to fill the ballot before handing it to someone in a nearby vehicle. She further revealed that “After living side by side with them for more than six months now, we have learned that any refusal could result in a direct ticket to the basement”.

A declaration by Russia that its territory is being attacked by Western weapons supplied to Ukraine is anticipated to stem from the expected annexation. Foreseeing the unfavorable results of the above less-than-shrewd Russian strategy, the Ukrainian capital and the Occident have denounced and promised to disregard the results of the poll.

In his nightly address on Friday, Ukrainian president Volodymyr Zelensky stated that the “sham referenda” would be harshly criticized by the international community, as well as the “criminal mobilization” that the invaders are currently attempting to carry out in the Crimea and other regions of Ukraine.

Furthermore, the president voiced a “simple request” to his people in the temporarily seized regions: “do the main thing – save your lives and help us weaken and destroy the occupiers. By all means necessary, hide from the Russian mobilization and steer away from conscription letters.”

On the other hand, a Moscow-backed separatist leader from the Donetsk region of Russia has called this referendum ‘a historical milestone’. The Russian state’s federal assembly chairman, Vyacheslav Volodin, addressed the Ukrainian provinces, "If you decide to join the Russian Federation, we will support you."

The approach to this referendum from different parts of the world is conflicting, especially between Russia and the western world. The responses from the residents of Russia-occupied Ukraine unveil a picture far detached from these claims and clashes between the world leaders. The residents of Ukraine are fighting a greater battle than the one fought on the surface by the militias of the two countries.

In a recent report published by BBC, they portrayed the sad and unfortunate reality faced by school teachers in Russian-occupied Ukraine. Ukrainian school teachers have reportedly been told to refuse to teach the Ukrainian curriculum and instead follow the Russian education system and wipe out Ukrainian textbooks from the schools in Ukraine. An official from Balakliya Five School confessed that “At the beginning of the academic term, we were told to teach our students that Ukraine was a territory of Russia, termed as Malorussia or simply ‘Little Russia’.”

In response, Ukrainian President Volodymyr Zelensky recently awarded the winners of the international student Olympiads with certificates and penned a note to thank the country’s teachers for helping young Ukrainians to master various sciences and disciplines, to commemorate the upcoming ‘Educator's Day of Ukraine’, and said that the work of Ukrainian educators is appraised not only by student victories at Olympiads but also by victories on the battlefield. The hidden irony in these words is hard to ignore since the real warriors of the war are indeed the Ukrainian teachers who are being tormented for refusing to follow Russian orders and continue to teach by the Ukrainian curriculum.

This war on the ground takes us down memory lane to a well-known war story by Alphonse Daudet, ‘The Last Lesson’. In the late 1770s, at the time of the Franco-Prussian War when France was occupied by Prussia, schools in the occupied territories like Alsace and Lorraine were asked to cease their teachings on the French language and replace it with the German language, thereby imposing linguistic chauvinism. Back then we were horrified by this fictional tale depicting the vast destruction of war on the cultural essence of human lives; however, now it has become a reality for the students in Russian-occupied Ukraine.

The Ukraine-Russia war has wreaked havoc on two crucial aspects of Ukrainian society, the political order and by extension, education. As Russia forces its power on the occupied parts of Ukraine by controlling its administration and education, Ukrainian officials and ordinary people alike undergo torture in order to resist the unwanted Russian encroachment. As such, these events have become both a poignant reminder of the past and a precaution for the future.