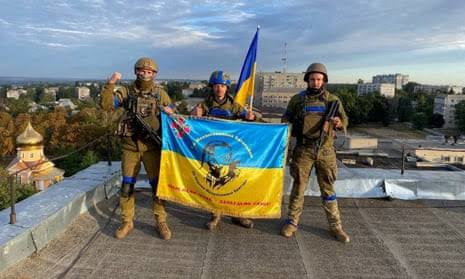 Ukraine is preparing for the battle against the volatile troops of Russia. Front-line positions come under regular fire as both Russia and Ukraine attempt to push forward. U.S. authorities immediately predicted Kyiv would fall after Russia invaded Ukraine on February 24.

This prognosis was in line with earlier evaluations of Moscow's military capabilities. It seemed to seal an inevitable occupation of its former Soviet territory. Yet, even six months later, the Volodymyr Zelenskyy administration continues to be in charge of Kyiv.

The story of Ukraine's survival after half a year of blood-soaked fighting in Europe since World War II is one of the unexpected resiliency, underrated of its previously degraded military now supported by Western powers, and overestimation of the military strength of its powerful neighbor to carry out a relatively simple goal.

Compared to its triumphs in the northeast, Ukraine's progress in the southern regions of Kherson and Zaporizhzhia has been far more constrained. As Russia and Ukraine try to advance, front-line positions are frequently fired. Abdujalil Abdurasulov of the BBC could visit the front lines in Kherson, where Ukrainian men have been warned that they may be conscripted to fight for the Russian army.

Further, Maxar Technologies' satellite imagery shows homes and buildings on fire with what appears to be Russian artillery battalions firing on nearby villages to the northwest of the Ukrainian capital. According to Pifer, a senior scholar at the Brookings Institution, Russia initially positioned itself to capture control of as much as two-thirds of Ukraine.

He claims that it is now apparent they will be unable to accomplish it. On the map of Europe, there will be a sovereign and independent Ukrainian state that will be more than simply the remnant that Moscow may have intended to leave.

However, the reality of Ukraine's conflict has contributed to Kyiv and its supporters' tenacity as the now-clear military flaws of Russia are on public show for the world to see. An invasion planned to be over in only three days, with victory approaching its seventh month with no sign of an end.

Putin envisioned himself leading his troops through Kyiv, which Ukraine had taken down and mounted successful counterattacks. Instead, he wrote in an opinion piece made public by the Atlantic Council on Tuesday, Ukraine staged a "parade" of demolished Russian tanks in the capital's center on the eve of Independence Day.

Although Ukraine's achievements are heartening, there is little question that Russia has not given up on its aspirations to obliterate Ukraine. On the other hand, Moscow is more committed than ever to carrying out its homicidal goal at all costs.

Ukraine's president said he would be ready to meet with Putin to discuss a possible settlement. However, he now strikes a considerably more defiant tone than he did in his remarks on Tuesday to commemorate the independence day of his nation.

Zelensky stated that "we will not seek an understanding with the terrorists" and "we do not go down to the bargaining table out of fear, with a gun pointed at our head."