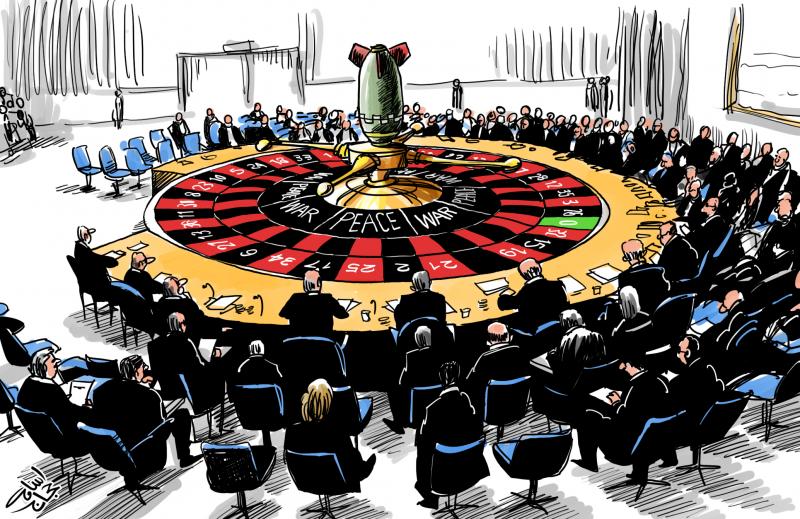 There have been innumerable conflicts in the second half of the twentieth century. Some of them are still going on, all under United Nations observation. In 1945, the United Nations (UN), was established as an international umbrella group with numerous aims, including war prevention and peacekeeping in contested areas. However, countless times throughout the world, the UN has failed because of the five nations', authority to veto.

Some of the most catastrophic accusations of inefficiency by the UN are as follows:

Palestinians have been battling against what a United Nations investigation previously described as Israel's ethnic cleansing since the establishment of the Jewish State in 1948. Out of a total population of 1.9 million from 1947 to 1949, a minimum of 15,000 Palestinians were assassinated. And 750,000 of the population is currently displaced. In the violence from 2000 and 2014, almost 7,000 Palestinians and 1,100 Israelis have been put to death.

Now, 85% of historic Palestine is controlled by Israel. It also forces an impending siege on Gaza, in contempt of many United Nations resolutions calling for a halt to its actions. And it is continuing its building of illegally settling in occupied countries. The US has also often used its veto power to suppress resolutions by the UN Security Council that disparage Israel's use of force against Palestinian civilians.

In the disputed region of Kashmir, a constant conflict has become one of the worst human rights disasters in history. Despite several UN resolutions implemented in the matter, the fighting was distinguished by wild deaths and violations, imprisonment of leaders and militants, torture, and disappearances of the Kashmiris. The Himalayan land is partitioned between India and Pakistan. Both of which have claimed complete independence from the British colonizers since 1947. After 1989, the revolt of Muslim groups in numerous Indian-governing factions in Kashmir seeking either union or independence with Pakistan has gained strength.

In 1975, the Communist Party Khmer Rouge took authority of Cambodia by using ultra-Maoism policies after the US-Vietnam War and the Cambodian civil war of 1975. Between 1975 to 1979 the dictatorship perpetrated genocide murdering around 2 million people, approximately 25% of the country. The involvement by Vietnam stopped the Khmer Rouge regime's genocide. The UN recognized the Khmer Rouge regime while dismissing concerns about human rights atrocities.

The decades-long civil war has raged between the competing clans in Somalia since the ousting of ruler Mohamed Siad Barre by the Somali rebellion in 1991. Since then, the UN peacekeeping operation, UNOSO, created in December 1992 for aiding people stuck in civil conflict and starvation, has failed to communicate with and repeated assaults on UN officials due to lack of governance. Around 500,000 civilian fatalities were inflicted in the nation by the failure of the UN peacekeeping operation.

The civil war between the Rwandan Army and the Rwandan Rebel Patriotic Front (RPF), which began in 1990 and persisted until 1994, was one of the bloodiest ethnic genocides since the Second World War. In 1994, 10 UN peacekeeping officers were assassinated by the then Hutu-dominated Government to avoid international intervention.

In only three months, around 800,000 Tutsis were brutally killed, and about 250,000 women were raped in Rwanda. And while the UN forces abandoned or just spectator-like lived on, the awful and violent bloodshed raged.

In 1992, after a ballot, Bosnia and Herzegovina declared their independence. The Serbians' government offered their support to start the war, and as such, the Bosnian Serbs mobilized their soldiers into the nation, following the proclamation of independence,

In July 1995, under the direction of former General Ratko Mladic in Srebrenica, around eight,000 Muslim men and boys were murdered by Bosniak Serbs on Europe's territory in the biggest mass murders since the Second World War. Many Muslim victims escaped to Srebrenica, an UN-declared protected area, only to find out that the undersized and weakly equipped Dutch forces could not safeguard them in Srebrenica.

Rebels in the western part of Sudan's Darfur arose in February of 2003 and accused the authorities of Khartoum that non-Arab farmers had been discriminated against unjustly. Since then, around 200,000 civilians have been murdered, 4.4 million people require assistance, and more than 2.5 million have been displaced.

Four years later, however, the United Nations agreed to send 26 000 troops to Darfur for a settlement. For Sudanese President Omar Hassan al-Bashir in 2009 and 2010, the International Criminal Court issued warrants for war crimes and genocide as part of his efforts to quash the Darfur rebellion.

According to a study carried out by one of Britain's top polling firms, over one million Iraqis were killed during warfare in their nation since the US-led invasion in 2003. The invasion and regime change desired by the US in the next years left Iraq exposed to Daesh's terrorism with civil and economic turmoil.

The U.S. and UK's bogus accusation that Saddam's regime owned Mass Destructive Waffen, UN Resolution in 1483 tried to legitimize the attack of that government.

With its leader Bashar al Assad vowing he "will always confront terrorist groups" referencing pro-democracy protestors, the Syrian regime began a deadly raid on nonviolent protestors that flooded the streets in March 2011. Right after the demonstrations escalated into a revolt, the authorities freed Al Qaeda militants, who subsequently became Daesh's backbone of leadership, which expanded to Syria out of Iraq in 2014.

In many fighting locations in Syria, various western nations are involved. Next year, the UN Security Council sought to adopt multiple resolutions on conflict resolution, but Russia used its veto power to protect Assad, its friend, at least ten times. Syria's crisis alone had driven over one-third of the world's refugee population away by the end of last year, more than 6.3 million. A further 6.2 million Syrians are displaced domestically.

In July 2011, Southern Sudan was separated from Sudan and became an independent country. The country was in a civil conflict between Salva Kiir, President of the Dinka ethnic group, and Riek Machar, former Vice President of the Nuer ethnic group. According to a State Department-funded research, at least 382,000 individuals were murdered during the civil war.

After the launch of Saudi-led international coalition operations in March 2015, the conflict in Yemen begun in 2014, between troops loyal to President Abd Rabbu Mansor Hadi's internationally acknowledged government, supported by Saudi Arabia and Iranian-supported Houthis, was more brutal. Around 2015, a war escalated, leaving the poorest country in the Arab world in a condition of ruin. The Coalition started its operation in Yemen. Under the embargo placed on a war-torn country, the United Nations could not supply humanitarian supplies, food, and medications to residents.

On August 25, 2017, 750,000 people, including women and children, were killed and sent to Bangladesh. According to the Ontario International Development Agency (OIP), Myanmar started a severe military crackdown on the Muslim ethnic minority (OIDA). China, through its UN Security Council, stood behind the Rohingya catastrophe. And also behind Myanmar by opposing Rohingya initiatives.

The United Nations has documented the violation, murdering, and cruel blows and disappearances by Burmese State authorities against the mass gangs – including newborns and small children. According to the UN, Rohingya are the "most persecuted people in the world."