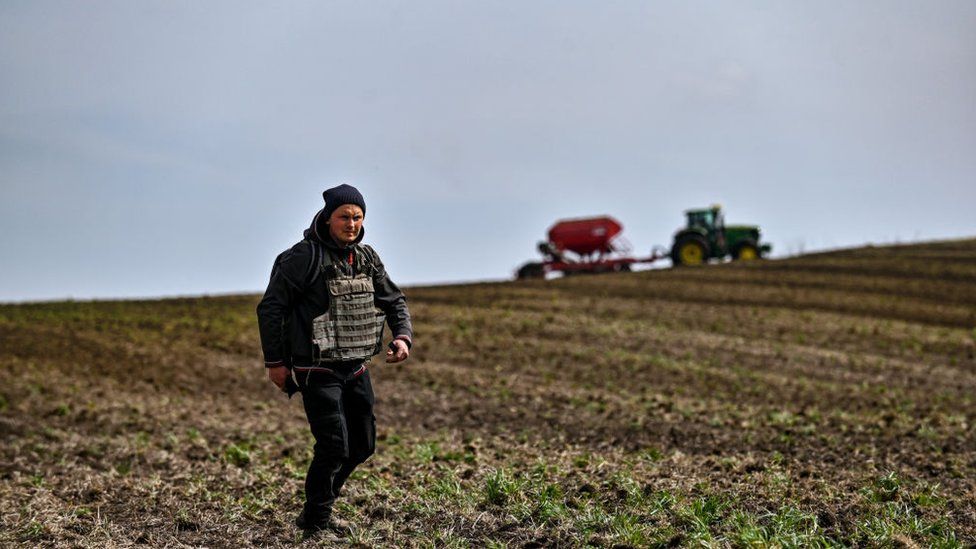 A farmer wears a flak jacket during spring sowing in the Zaporizhzhia region. Getty Images.

During a phone call on 30th May, the President of the Russian Federation, Vladimir Putin, told the Turkish President, Recep Tayyip Erdogan, that his country is ready to cooperate with Ankara to resume maritime traffic between the two countries. The Russian President allegedly referred to grain exports from the currently blocked Ukrainian ports. The condition set by Putin is that the West relaxes the sanctions imposed recently.

Moreover, Putin emphasized that the ongoing grain shortage is the result of the West's short-sightedness, adding that the country was ready to export significant quantities of fertilizers if the sanctions were lifted. Russia stated its readiness to restore safe commercial navigation in the Azov and Black seas, though the President did not specify which Ukrainian ports would reopen. On his side, the Turkish President reiterated his help as a mediator and precisely his willingness to set up an observation mechanism between Moscow, Kyiv, and the United Nations, should an agreement be reached.

Turkey's involvement in these negotiations is not a surprise. Ankara has condemned the Russian invasion since the beginning of the conflict but never took a clear position. Despite being a NATO member, the country maintained relations with both Russia and Ukraine and refused to join the European Union's sanctions. Moreover, the country offered to mediate by organizing peace talks in Istanbul on 29th March. During this event, the Russian President pledged to cut military activities in North Ukraine, a statement met with skepticism by the Ukrainian President, Volodymyr Zelenskij, and other representatives.

The news about the possible opening of Ukrainian ports to resume grain exports would relieve the international community and Ukraine. Since the conflict began on February 24th, 22 million tons of grain have been stuck in the silos of Ukrainian ports as these are located in the Black and Azov seas, currently under Russian blockade. The issue now is that Ukraine needs to export this significant amount of grain as soon as possible before the country's new harvest.

Before the war, Ukraine played an important role in grain provision worldwide, exporting about 4.5 million tons per month through several ports. This accounted for nearly 12% of the world's wheat, as well as 15% of corn and sunflower oil. As the ports are blocked by Russian ships, the only option currently available is land routes. Nevertheless, this leads to road congestion problems and several delays, triggering a dangerous domino effect. Currently, according to APK-Inform, from May 1st to May 22nd Ukraine exported 27.9 thousand tons of grains by road transport, mainly through the Polish border.

This situation has already led to a sharp increase in the global price of grain, cooking oil, fuel, and fertilizers. This, in turn, has the potential to generate several problems in poor countries dependent on Ukrainian exports. Africa is a case in point, as several countries import staple foods from Ukraine. There are fears that these sudden price changes can undermine food security in those severely hunger-stricken states and ultimately lead to societal unrest. Africa imports 85% of its wheat consumption, particularly countries like Tanzania, Ivory Coast, Senegal, and Mozambique. For some countries like Botswana, Lesotho, Mauritius, and Cape Verde wheat, rice, and corn represent more than 40% of the calorie intake of the local population.

For Ukraine and the European Union, Russia’s behavior is a clear form of blackmail. This is what the Ukrainian minister of foreign affairs, Dmytro Kuleba, declared recently during the Davos meeting. He pointed out that exports are now a necessity as the unsold grain will not leave space for the next harvest. As many countries face food scarcity, it is a sin that Ukrainian grain is getting rotten in the ports.

On May 24th, European Commission Chief Ursula von der Leyen urged Moscow to unlock the exports. She stated that Moscow is deliberately weaponizing food and hunger to achieve its geopolitical goals worldwide. She said that Russia is "deliberately driving up global prices or trading wheat in exchange for political support" and "using hunger and grain to wield power." This leads to the problem of food security as it will be the most vulnerable part of the world to bear the consequences of this behavior.

The war is contributing to an already difficult situation in many areas. Before the war, there were already several problems related to precarious food supplies. As the BBC reports, one problem was the extended drought affecting wheat and vegetable oil crops in Canada, as well as corn and soybean in South America. Also, labor shortages in Indonesia and Malaysia were another issue that translated into reduced harvesting capacity and therefore, higher prices. Ukraine was, therefore, seen by many countries as the more viable solution to soothe the global situation.