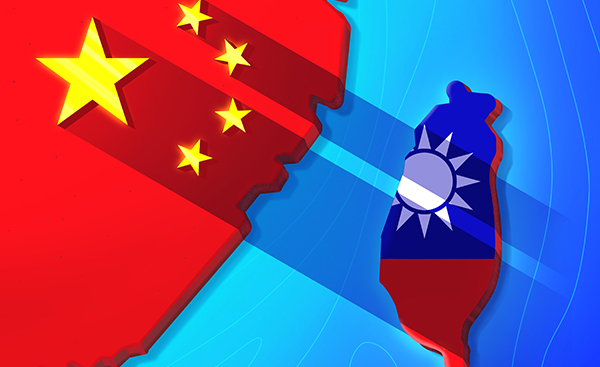 In May, the US Department of State updated its Fact Sheet on the current state of US-Taiwan relations on its website twice. The new version, released on May 28, includes the previously removed phrase “The United States does not support Taiwan’s independence,” as well as statements that US policy toward Taiwan has been consistent for decades and across multiple administrations and that the US has a long-standing One-China policy.

In early May, State Department spokesman Price told the media that the State Department routinely updates the factual list of US-Taiwan relations to accurately reflect the bilateral relationship, emphasizing that the US One-China policy has not changed and urging Beijing not to take advantage of the opportunity to pressure Taiwan. 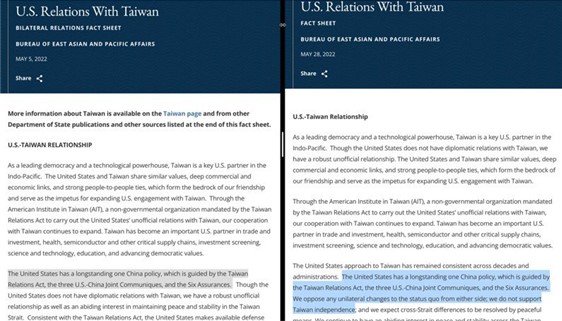 (Comparison of May 5 and May 28 versions  The words “The United States does not support Taiwan’s independence”, which were removed from the old version (left), have been put back in the latest version (right) and reaffirm the One-China policy.)

After the Biden administration took office, the State Department’s East Asia Bureau did not immediately adjust this list of facts, which remained the same as the version published in August 2018. The State Department updated the list last month, removing the phrases “Taiwan is part of China” and “The United States does not support Taiwan independence” and adding “a long-term One-China policy based on the Taiwan Relations Act, the US-China Joint Communiqué and the Six Assurances.”

Two days later, the State Department updated its list of facts to include “The United States does not support Taiwan independence” and “looks forward to a peaceful resolution of the cross-strait issue.” This is the material of both Blinken's speech and its 2018 version.

The most recent Fact Sheet has been slightly revised, beginning with “Taiwan’s role as a leading democracy and technological powerhouse in the Indo-Pacific region.” It goes on to say that “the United States and Taiwan have no diplomatic relations, but a strong unofficial relationship,” and that the two countries share and strengthen economic, trade, and people-to-people ties.

The US has a long-standing One-China policy founded on the Taiwan Relations Act, the US-China Joint Communiqué, and the Six Assurances, as per the May 5 version of the One-China Policy paragraph.

As per the most recent version, the US has had a consistent policy toward Taiwan for years and across different administrations, and the US has a long-standing One-China policy centered on the Taiwan Relations Act, the United States-China Joint Communiqué, and the Six Assurances. “We oppose any unilateral change to the status quo by either side on both sides of the Taiwan Strait; we do not support Taiwan’s independence, and we look forward to a peaceful resolution of cross-strait issues,” the State Department wrote.

The new version reaffirms that the US has an abiding interest in maintaining peace and stability in the Taiwan Strait. Under the Taiwan Relations Act, the US will provide Taiwan with access to defense material and technical services in quantities sufficient to maintain an adequate self-defense capability.

The Fact Sheet has been fully updated, but the Taiwan page still retains the 2018 summary, “According to the 1979 Joint Communiqué, the United States recognizes the Government of the People’s Republic of China as China’s sole legitimate government; the United States’ acknowledging position on China is that there is only one China, and Taiwan is part of China.”