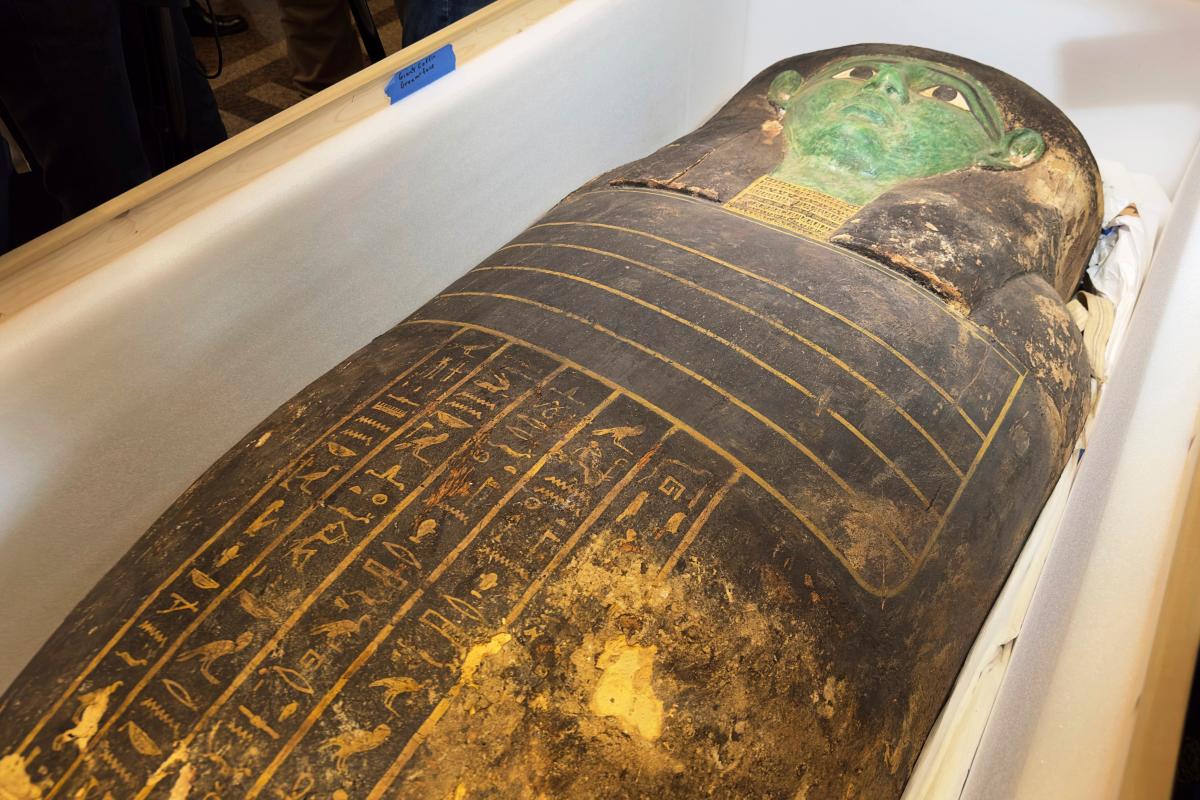 An ancient wooden Sarcophagus known as The Green Coffin has been returned to Egypt from the Houston Museum Of Natural Sciences, USA after US officials determined it was looted a decade ago.

The wooden sarcophagus lid was officially handed over to the Egyptian Government in a ceremony held in Cairo, by Daniel Rubinstein, the US chargé d’affaires in Egypt. Several officials attended the ceremony followed by a press conference.

The Sarcophagus is also known as The Green Coffin or the Green Sarcophagus, because of the green color painted on its face. It belonged to a Priest named Ankhenmaat.

The green Sarcophagus is one of the biggest sarcophagi in Egyptian history and weighs approximately 500 kilograms(about 1100 pounds). It is nearly 3 meters (9 feet) in length and 90 centimeters in width.

According to Mostafa Waziri, the top official at the Supreme Council of Antiquities, Egypt, the Sarcophagus is about 2700 years old. It dates back to the Late Dynastic Period of Ancient Egypt. This period spanned from 664-332 BC- from the time of the last Pharaonic rulers to Alexander the Great's campaign.

“We are pleased that this object will be returned to Egypt, where it rightfully belongs.”, Mostafa Waziri, told the Associated Press.

How Sarcophagus Was Smuggled

The green coffin was looted from the Abu Sir Necropolis, north of Cairo, by a well-organized global network of antiquities smugglers. It was smuggled to the US through Germany in 2008, according to Manhattan District Attorney Alvin L Bragg.

"This stunning coffin was trafficked by a well-organized network that has looted countless antiquities from the region," Bragg said.

The artifact was then sold to a private collector before it was loaned to the Michael C. Carlos Museum at Emory University, and later to the Houston Museum of Natural Sciences for its Hall of Ancient Egypt, according to USA TODAY.

The artifact was seized by the US authorities who ruled it was looted.

Bragg added that only the Lid was trafficked illegitimately as the whole Sarcophagus weighed about half a ton, pushing the looters to leave the base.

The Houston Museum of Natural Science said in a statement to USA TODAY it worked with U.S. and Egypt officials to return the artifact.

"HMNS has never owned the artifact and was not involved with its removal from the Arab Republic of Egypt. As a courtesy, once we learned of the circumstances regarding the piece, we facilitated its immediate return. HMNS is fully supportive of repatriation efforts for antiquities illegally removed from their country of origin," the museum said.

The recovery of the coffin is a result of the Egyptian Government Efforts to stop the smuggling of artifacts and restore its Ancient Antiquities.

“A precious piece of Egypt’s history was recovered after cooperation with our friends in the US, and after efforts that lasted for several years,” Shoukry said.

The Golden Coffin was also smuggled illegally by the same group of smugglers, said Alvin Bragg.

The US bought it for $4M from Paris in 2017 and was featured at the New York City’s Metropolitan Museum of Art.

In September, the Metropolitan Museum returned 16 antiquities to Egypt after a probe in the US concluded they had been illegally trafficked.

Moreover, in 2021, the Egypt government recovered 5,300 stolen artifacts from around the world.

This is a Big achievement in restoring precious pieces of history. The Egyptian government says It will help boost tourism which will add to their struggling economy.

The Authorities in Cairo thanked the US government for their cooperation.

Egypt also demands the recovery of the Rosetta Stone, one of the masterpieces in the British Museum.

The country expects to open a new museum The Grand Egyptian Museum near the Giza pyramids in 2023 to showcase their historical masterpieces.