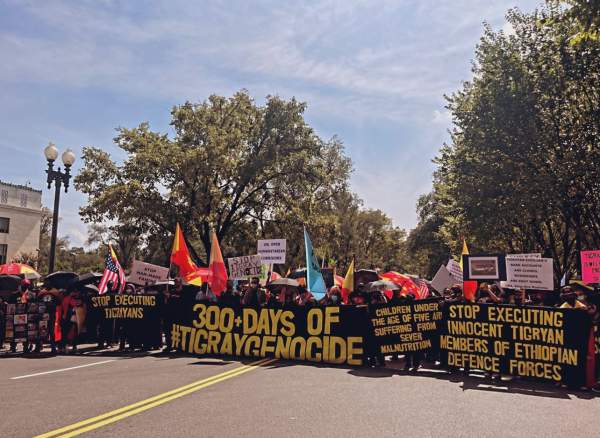 A brutal internal conflict has plagued Ethiopia for the past ten months. However, last week, the nation witnessed one of the most horrific outcomes of the war in the remote community of Chenna. Nestled in the northern mountains of Ethiopia, the region is littered with the remains of over a hundred rebel combatants. There has been an exodus from the community due to the odious smell emanating from the dead. The village has now been rendered a ghost town. Scavengers living off the corpses are the newest residents of the village.

According to government sources, the Tigray People’s Liberation Front (TPLF) is believed to be the organization responsible for orchestrating the massacre. According to reports, around 125 civilians, including women and children, have been killed by the TPLF. There have also been several reports of human rights abuses committed by Tigray rebels in Ethiopia

The ten-month-long conflict erupted after an attack against an Ethiopian military base, which prompted retaliation by the federal government. Despite PM Abiy's promises of a quick victory, conflicts have been spreading into neighbouring territories of Amhara and Afar areas in recent months. This has resulted in uprooting hundreds of thousands of people from their homes and killing an uncountable number of civilians.

Chenna, the village in question, was controlled by the TPLF until federal forces broke in and forced rebel forces to retreat. Over 125 villagers were reportedly killed during this retreat. There are also reports and shreds of evidence of shellings of civilian buildings by rebel forces.

As of yet, investigators have neither been able to independently confirm the number of victims nor verify if any of the victims were combatants. However, Mebratu Adane, a spokesman for a local militia, said most of the bodies that have not been buried were those of TPLF rebels. He also added that the unbearable stench of the dead engulfed the entire area, forcing the remaining villagers to flee.

Yalew Kasse, a militia fighter from the Amhara region, alleged that he had been burying the dead civilians for four days straight. Kasse shed light on the horrifying details of the brutality, having witnessed the cold-blooded murder of an entire family comprising of a mother, a father, a four-year-old boy, and a six-year-old girl. Stones and leaves have been placed over freshly dug mass graves. Militia fighters said the graves of still more civilians could be found elsewhere, sometimes right outside their homes.

Unfortunately, Human rights violations have also been documented against the federal government. The TPLF claims the government blocks humanitarian aid to Tigrayan civilians. In addition, the women residing in the Tigray region have been subjected to rapes and sexual harassment by government forces.

The fighting in Amhara and the recent discovery of the Chenna massacre have amplified global concern about the war in northern Ethiopia. Michelle Bachelet, the chief of the UNHR, spoke about the grave consequences of the war spilling over to the whole of the Horn of Africa. International efforts to broker talks have made no visible headway.

The government seems strongly determined to annihilate the TPLF by using all military resources at hand. In Dabat, a town southeast of Chenna, Ethiopian soldiers conducted weapons and fitness drills on Tuesday while preparing to push farther north. “We are planning to go to the north and destroy the junta, and we are well prepared," said Colonel Eshetu. "We have been training for more than three weeks," he said. "Our soldiers are more than capable of destroying the Tigray rebel force."

Blockades of civilian aid and allowing such violations exacerbate the conflict, will only lead to retaliation that exceeds the recent massacre. The actions of Tigray rebels must also be condemned, but negotiating a cease-fire and allowing the millions of people in Tigray and the surrounding regions to receive the help they need is paramount to avoid further deaths in the country.