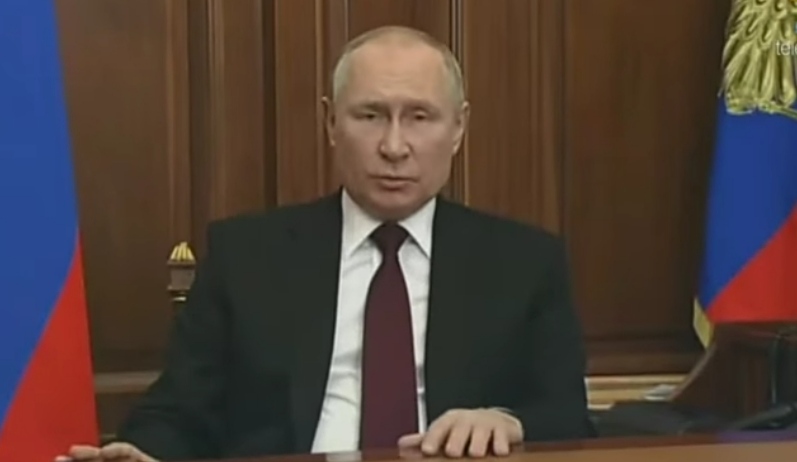 President of Russia, Vladimir Putin, recognized two breakaway region, Donetsk People’s Republic and the Luhansk People’s Republic in the eastern Ukraine as independent. This increases the risk in the ongoing crisis, which the West fears to possess the potentiality of a major war. Putin put up Ukraine as an integral part of Russia’s history in a televised address to the public. He stated that Ukraine was ancient Russian lands. He also expressed that he was confident regarding the support of Russian people on his decision.

Putin informed the leaders of Germany and France about this through phone calls. The leaders of Germany and France expressed disappointment over this. Putin was later seen on Television signing the decree. Putin’s televised address included history that dated far to the Ottoman Empire and to recent tensions over NATO’s eastward expansion. This expansion is a key irritant for Moscow and Moscow’s move could lead to a last-minute bid for a summit with U.S President Joe Biden.

Putin mentioned that he deems it necessary to make this decision. According to him this decision should have been made long back, in order to recognize the independence and sovereignty of Donetsk People’s Republic and the Luhansk People’s Republic. He also stated that if Ukraine joins NATO, it would serve as a direct threat to the security of Russia.

Putin has contributed immensely for years to restore Russia’s influence over nations that emerged after the downfall of the Soviet Union. Ukraine is one of the nation that holds utmost importance in this ambition.

Russia has denied possible attack on its neighbor. Even so, if Russia doesn’t receive sweeping security guarantees which includes a promise by Ukraine that it would never join NATO, the nation threatened unspecified “military-technical’’ action. This recognition of the rebel-held areas clears the way for a possibility of Moscow arguing that it is intervening as an ally to protect them against Ukraine. They could also send military forces openly to the separatist regions-Donetsk and Luhansk.

A former Russian parliament member Alexander Borodai asserted that the two separatist regions would then look to Russia to help them grab control of the parts of the two regions that are presently under the influence of Ukranian forces.  Alexander Borodai is also a former Done